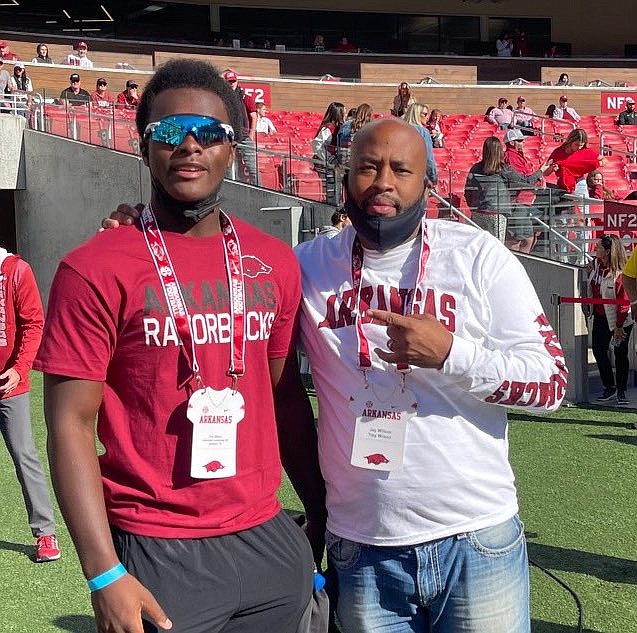 2023 defensive lineman Trey Wilson and his father Jay before the start of Arkansas' game against Auburn.

One of the University of Arkansas’ top defensive targets Trey Wilson hoped to visit Fayetteville on Jan. 15, but had to cancel and is now planning to visit this spring.

He and his father attended the Hogs’ 20-10 victory over Texas A&M in Arlington, Texas.

“That’s when they really got after it and that was when I was like, ‘OK, these guys are legit,’ ” Wilson said. “That’s when I told my dad we had to get up there for another game.”

Wilson did just that. He and his father visited the Razorbacks for the Auburn game on Oct. 16. Wilson looks forward to seeing more of the campus in the spring while spending time with Coach Sam Pittman, defensive line coach Jermial Ashley and other staff members.

“It’s a priority to get up there being the fact that I went to a game, but I didn’t get to see the campus or talk to any teachers or anything like that or have actual time with the coach,” Wilson said of Arkansas. “So it’s a big thing for me just getting up there and making sure I see everything. I just want to see the campus and spend more time with the coaches and get to talk to Coach Pittman.”

Wilson was expected to visit Oklahoma State on Saturday and has plans to visit Texas Tech on Jan. 29. During his conversation with Ashley about being unable to visit on the 15th, Wilson said they discussed where he stood with the Hogs.

“We were talking about me being a priority for them and the main part of that is keeping in communication, making sure we see each other,” Wilson said. “Me going there and him visiting my school.”

He’s also looking to visit Baylor, Oklahoma State, Northwestern, Ole Miss, Purdue and Texas Tech in addition to Arkansas. Wilson is open to other schools should they come into the picture.

Wilson said building on his relationship with Ashley is important to him.

“Making sure we’re both on the same page where we stand in the recruitment and building the relationship even more because there’s offseason and next year is senior year and I plan to sign early and commit before the season,” Wilson said. “Come this summer it will be time to start narrowing down, so I’m trying to make sure that everyone that actually wants me I’m building a relationship with and see who fits the best.”

His mother Nikketta is the principal at Garland Webb Middle School, while his father Jay is a respiratory therapist. A team captain, Wilson has a 3.5 grade-point average and is looking at coaching or sports marketing after football.

He’s sees Ashley as a developer of talent.

“He’s a developer and that’s what he did at Tulsa too,” said Wilson, who plans to be an early enrollee. “I love his work and I feel like he’s a really good coach and he’s great at communicating and just getting his word across how he’s able to be a good coach. He had a pretty good D-line this year. A really good D-line actually. They got after it this year and I was impressed by that.”