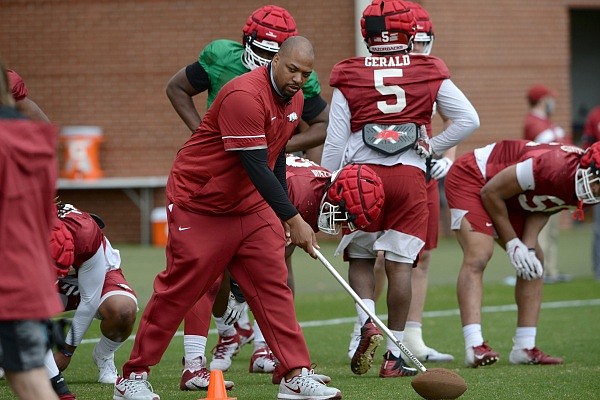 Ashley, who will turn 39 on Friday, had just completed his first year on the staff after working the prior six years at Tulsa. He replaced Derrick LeBlanc, who was hired away from Kentucky as part of Pittman’s original staff in the winter of 2019-20.

Pittman had said in late-season interviews that he hoped not to lose any of his 10-man staff of assistant coaches.

Arkansas has not had the same coach or combination of coaches on its defensive front since Rory Segrest held the position from 2014-16 under Bret Bielema.

John Scott Jr. worked the position in Bielema’s final season in 2017. He was retained by Coach Chad Morris, who added Arkansas State University graduate and long-time SEC assistant Steve Caldwell to work with defensive ends in 2018. Caldwell and Kenny Ingram coached the spot in 2019 after Scott joined the South Carolina coaching staff, then LeBlanc came on board the following year.

Davis, a native of College Park, Ga., and a Razorback defensive lineman from 2009-12, was a graduate assistant at Arkansas from 2014-16, overlapping two years with Pittman’s stint as offensive line coach under Bret Bielema.

Davis went on to become co-defensive coordinator at Hutchinson (Kan.) Community College (2017-19), where Pittman had served as a head coach in the early 1990s, before joining Coach Lovie Smith’s staff at Illinois in his first full-time on the field job on the FBS level in 2020.

Davis joined Eli Drinkwitz’s staff at Missouri as a defensive analyst in 2021, and he received a mid-season promotion to replace defensive line coach Jethro Franklin, who was fired in October. Davis is now coaching defensive interior linemen for the Tigers, while Kevin Peoples, a former Arkansas staffer under Bobby Petrino and John L. Smith, coaches the defensive edge players.

Early, a University of Arkansas-Monticello graduate who has worked at the University of Central Arkansas (2004-08), Fayetteville High (2009-12), as a defensive quality control coach at Arkansas (2013), and defensive line coach at Arkansas State (2014-18), has been the defensive line coach at Houston since 2019. Early is also the adopted father of former Fayetteville High and UA linebacker Dre Greenlaw of the San Francisco 49ers.

Haley was hired as defensive line coach this month at Minnesota. Haley, a native of Gadsden, Ala., and an Alabama A&M graduate, was an assistant on Odom’s staff at Missouri from 2017-19, serving the final two years as senior associate head coach.

Haley’s extensive background includes a one-year stint as graduate assistant at Arkansas (1990) under Jack Crowe, and SEC stops at Mississippi State (2004-06) and LSU (2009-14). He has also coached at Clemson, Baylor, Georgia Tech and Texas, among other stops and spent a two-year stint with the NFL’s Chicago Bears (2007-08).