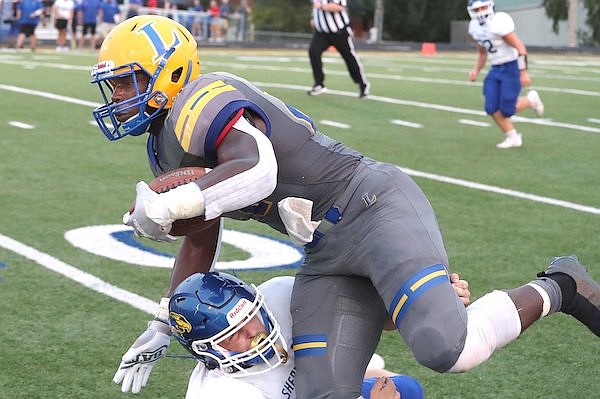 Arkansas’ first 2024 commitment got a chance to visit his future home again over the weekend.

Hot Springs Lakeside tailback Braylen Russell (6-2, 225) was in Fayetteville on Saturday as part of the Razorbacks’ second of three Junior Days this month.

Arkansas was No. 1 last season among Power 5 teams in rushing at 227.8 yards per game.

That and the fact the Razorbacks use multiple backs are positives to Russell, whose coach is former Arkansas quarterback Jared McBride.

“It feels good to know that you're coming to a team that is good at running the ball and good at what they do,” Russell said. “It's kind of tiring on a running back to get hit the whole game, so it's good for me, good for other players to get in and get out, and they've got to know who to guard and which one will be in.”

Russell committed to Arkansas on Nov. 6 after attending the Razorbacks’ 31-28 win over Mississippi State.

He did so inside the Fred Smith Center on campus in front of recruits, their families and Razorbacks coaches.

“I feel like I could've done better, but I feel like at the same time I did really good,” Russell said.

Russell is known for his physical running style, but does want to lower his 40-yard dash time of 4.58 seconds that he ran at Arkansas’ camp last summer.

“I have certain workouts that I do to make sure I can (be physical) on the field and prepare me to do it on the field,” Russell said.

What he wants to improve most is his speed.