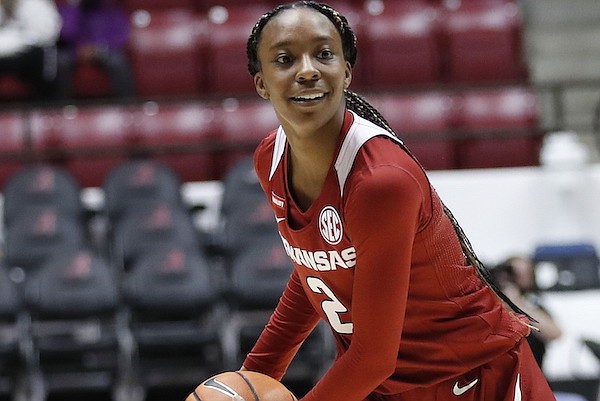 Arkansas guard Samara Spencer looks to pass during a game against Alabama on Thursday, Jan. 20, 2022, in Tuscaloosa, Ala. (Photo by Abigail Hinckley, University of Alabama via SEC Media Portal)

Spencer scored 18 in the Razorbacks’ 99-71 win at Alabama last Thursday, then bettered that with a 19-point effort in Sunday’s 74-54 win over Mississippi State.

It is the second time this season Spencer, who is averaging 10.2 points per game, has earned the honor. She becomes the first Arkansas player to win the freshman of the week award multiple times in a season since Jailyn Mason in 2017.

Spencer shook off a recent shooting slump to put together her best two offensive games of her young college career.

She managed just 19 points on 7-of-27 shooting in her first four SEC games combined, but came within one point of equalling that output in each game last week. Spencer scored 37 points on 13-of-25 shooting from the floor.

Spencer hit four three-pointers and also dished out five assists against the Crimson Tide. But she was even better against the Bulldogs.

The 5-foot-7 guard hit a season-high five three-pointers in the win over Mississippi State, including three during an 11-0 third-quarter run to help Arkansas take control.