Weekend slate had plenty of fireworks 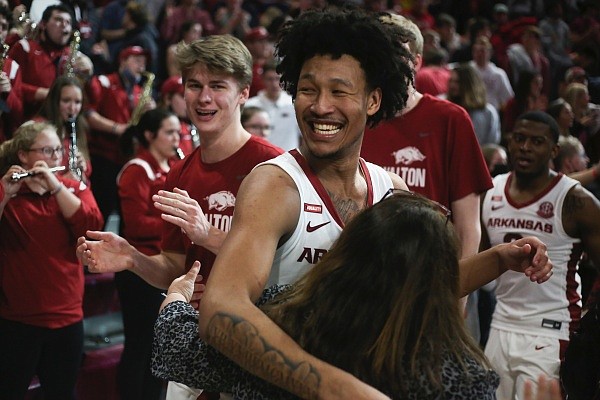 Arkansas forward Jaylin Williams (10) reacts, Saturday, January 22, 2022 during the second half of a basketball game at Walton Arena in Fayetteville. Check out nwaonline.com/220123Daily/ for the photo gallery.

Only the three Ss kept your trusty scribe from being a NFL player.

As a kid and through much of life, the NFL was a staple and then with time, and no doubt my job, my interest in professional sports waned.

It is all about college sports.

Yet, even a moderate observer of the NFL had to take notice of the playoffs as well as the Arkansas Razorbacks this past weekend.

Three of the four playoff games were won by a field goal that were all set in play with :04 on the clock.

The last of the four games was even more exciting, as the Kansas City Chiefs and Buffalo Bills scored 25 points with less than two minutes to play in regulation.

The Bills led 36-33 with just 13 seconds to play and Patrick Mahomes completed two passes in 10 seconds and the Chiefs kicked the field goal to send it to overtime where they won.

The Los Angles Rams led 27-3 but found themselves tied with 47 seconds to play. Matthew Stafford then completed passes of 20 and 44 yards to Cooper Kupp, whose wife was a heptathlete at the University of Arkansas, to set up the winning field goal.

Saturday was more of the same, but the real focus was on the Arkansas Razorbacks hosting the Texas A&M Aggies who had beat them 86-81 just two weeks earlier.

Arkansas opened with its toughest defense of the year, held the Aggies to 1 of 10 from the field and took a 20-4 lead.

The Razorbacks just didn’t put them away. The Aggies scratched and clawed and worked for high percentage shots and trailed only 33-29 going into the lockerroom.

The second half was a fight.

Defense was down and dirty on both ends of the court, as they fought like cats and dogs but not once did the Aggies get the lead in regulation.

Tied at 64-64 at the of regulation, fatigue was really setting in on the Hogs who had three players play more than 40 minutes and two play more than 30, as Eric Musselman primarily stuck to a seven-man rotation.

Arkansas entered overtime without its leading scorer, JD Notae, who fouled out but was not having a great game shooting 6 of 21 from the floor including 2 of 10 on threes.

The Aggies scored first for their first lead of the game, a pair of Razorback free throws tied it but A&M answered quickly.

Devo Davis then stepped up big, hitting a driving lay-up and a free throw for a three-point play and a 69-68 lead that became 71-68 on Jaylin Williams dunk.

The Aggies fought back, and it was 74-73 Arkansas with five seconds to play. The Razorbacks inbounded to Davis who threw a long pass to Stanley Umude for a dunk that was questioned by the TV crew, saying he should have just run out the clock, but it seemed like a moot point since the Hogs won 76-73.

It was their fourth consecutive win and moved their NCAA NET ranking to 55 after this weekend’s games.

Just a week ago they were ranked in the 70’s and they were a very long shot for the NCAA Tournament without winning the SEC Tournament.

Now they are a team on the rise with a big week ahead of them.

Wednesday they face Ole Miss which hosted Florida on Monday night. The Rebels had lost four consecutive since getting its lone SEC win against Mississippi State.

The Hogs can’t look past this one though. Kermit Davis is a crafty, smart coach who may employ a lot of zone defense.

Saturday the Razorbacks host West Virginia in the SEC-Big 12 Challenge, and those games are seldom easy.

Regardless, the Razorbacks were part of one of the most entertaining sports weekends, perhaps in history.