Razorbacks on target to compete Friday 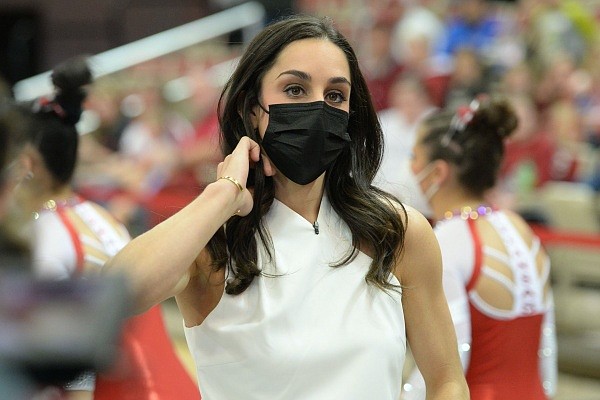 Arkansas coach Jordyn Wieber is shown prior to a gymnastics meet in Barnhill Arena.

University of Arkansas Coach Jordyn Wieber said Wednesday that the Razorbacks have turned a page in their early season covid-19 issues and are approaching full strength heading toward Friday’s return to action at No. 4 Florida.

“We are in a much better place than last week,” Wieber said on a video conference. “We don’t have anybody in quarantine currently, which is a nice feeling after a difficult three weeks.”

The Razorbacks were missing a few gymnasts for their season-opening win against Ohio State and for their 197.2 in a loss to Auburn in Week 2, but their roster numbers became untenable last week, forcing LSU to have its second postponement in a row.

“I’m knocking on wood as we speak, but it feels like we’re kind of through the worst of it, the thick of it and having our full team, every single member, back in the gym this week has been really, really great,” Wieber said.

Freshman Kalyxta Gamaio, a potential all-arounder who has been out with an injury unrelated to covid, is getting closer to ready but she will not compete in Gainesville, Fla., Wieber said.