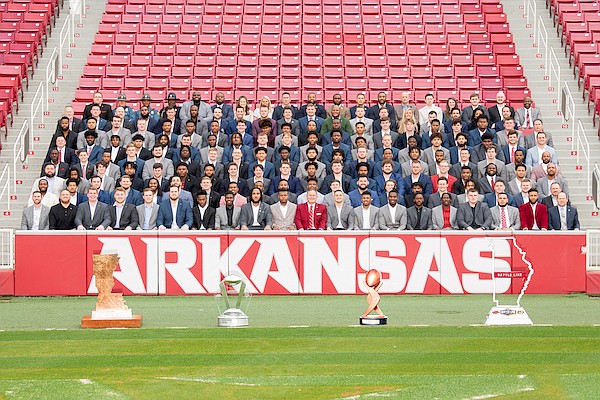 Members of the 2021 Arkansas football team pose for a photo following the regular season.

Pictures are worth thousands of words, or so it is said.

That’s the whole idea of Hawgs Illustrated. Good photos are required for a 4-color slick magazine.

But then again, everyone knows I’m more than capable of writing thousands of words without photos.

But this time, the photo — or in this case photos — came first.

I was aware in late December that Arkansas football coach Sam Pittman had a great idea to gather for a team photo with the three trophies won over the regular season. He made it a November campaign to add the trophies involved in the LSU and Missouri games to the Southwest Classic trophy won in September when the Hogs broke a nine-game losing streak to Texas A&M.

It was a great idea, even better when the Razorbacks added the Outback Bowl trophy with a 24-10 victory over Penn State on New Year's Day.

That team photo taken just before they left Fayetteville for Tampa, Fla., added one more trophy via Photoshop.

“It was totally Sam’s idea for the picture (with trophies),” said Kyle Parkinson, associate athletics director for communications. “It was a big deal in that he wanted it for the players, because it’s something they will always treasure.”

It’s unique because team photos are almost always taken in preseason. It’s hardly ever done after the regular season, and only once at Arkansas after the bowls.

This photo of the 2021 team, a complete surprise at 9-4 with a No. 21 final ranking, will be a bigger deal as time passes. It could be the turning point for the program, looked back upon in 10 years as the incredible breakthrough for Arkansas football.

No doubt, they will treasure it. For example, a call to Fred Marshall, the quarterback for the 1964 Razorbacks, said exactly that when asked about the most famous picture of the national championship team. It was taken on the sawdust of what was then Barnhill Fieldhouse in early January 1965. 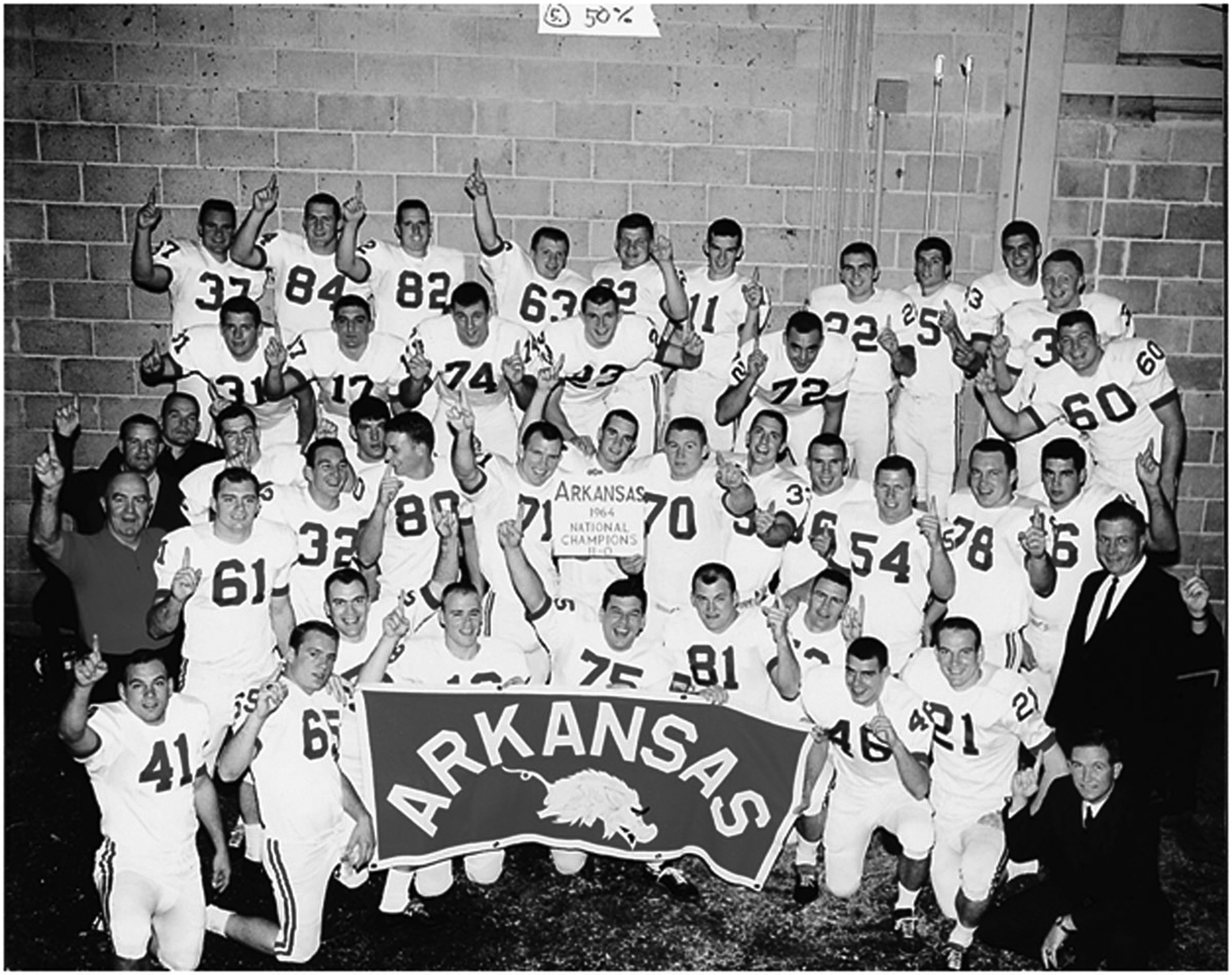 The photo of the 1964 Razorbacks is the most famous in program history.

That picture was taken just hours after word hit that the Football Writers Association of America had voted the Razorbacks No. 1, the only remaining undefeated team after the victory over Nebraska in the Cotton Bowl.

“It was the idea of Bob Cheyne, the sports information director,” Marshall said. “He grabbed Barry Switzer and Lon Farrell. They came to the dorm and told us to get the word out to come to Barnhill for something important.

“Now mind you, there were no cell phones, no texting. We had three phones in the dorm, one for each floor. Communication was word of mouth.”

Only three coaches were on campus. The rest were on the road recruiting. The brilliant red home jerseys were scattered after the bowl game.

“So they grabbed the white road jerseys and that’s what we wore for the picture,” Marshall said. “There were a few players missing. If we couldn’t find you in the dorm or around campus, you were not in it. But most of us are there.”

There were three notable exceptions. Head coach Frank Broyles and two star players, Jerry Lamb and Ronnie Caveness, were at the Hula Bowl in Hawaii.

“It’s a great picture and I must say that of all my Razorback stuff, that’s my most valuable possession,” Marshall said. “Bob Cheyne gave us each several copies.

“I got one my copy autographed by the entire team. It’s in my man cave. I don’t know that there is another one like it with every autograph. I got them all.”

“I do recall that my red jersey was in the dorm, but we didn’t try to find them,” Welch said. “I wouldn’t say we took them with permission. They all were returned, but we wore white that day.”

Welch is front and center in the picture, holding a banner.

“I had a way of doing that, getting in the front of pictures,” he said. “I started doing that all the way back in high school days at Little Rock Central.

“I’ve heard about the picture that Sam Pittman had taken before the bowl game and I applaud that. Ours wasn’t planned like that and was spur of the moment. It was just grab everyone you could find.

“A picture like Sam had taken with four trophies is pretty amazing and I’m pleased they did it. It will likely be a famous picture, too.”

In so many ways, it was appropriate because that is where the famed Fourth Quarter Class was held,  administered by assistant coach Wilson Matthews.

There is another team picture of the 1964 team, taken before the season on the practice field. There are 48 players included, no coaches.

But it’s the January photo that shows up everywhere, including every media guide. It’s in many Razorback man caves, restaurants around the state and considered the most famous team photo, even with some players missing.

“We probably didn’t have some married guys (in the photo),” Welch said. “They didn’t live in the dorm so they didn’t get the word. But most of the guys are there.

“You never get everyone. We didn’t have the trophy yet for that photo. I think it’s pretty neat what Sam did to get all of the trophies, even the Photoshop of the bowl game, for their team photo.”

David Bazzel, the creator for the LSU and Missouri trophies, applauds Pittman, too.

“Sam has done a great job in about every way,” Bazzel said. “Obviously, he’s the coach. But he’s also used the trophies — and I didn’t have anything to do with the Southwest Classic trophy — as great motivation like no one before him. Of course, once you win the first one, you build on that and he recognized it.

“And, he used the motivation for the LSU and Missouri games to play for those trophies to an absolute 'T.' They are to be symbolic for great wins. Now to take those trophies and take a team picture, that’s awesome.

“You use that to promote to recruits. I give Sam a lot of credit. No coach before him has done it quite the way he did and made the trophies become part of the drive for the season. It worked and these players are going to remember it forever.”

Not everyone who contributed to the four trophies is included in the 2021 picture. Treylon Burks and Tre Williams both “opted out” to prepare for the NFL Draft and were not on campus.

Pittman organized the photo shoot in the south end zone of Reynolds Razorback Stadium. Parkinson assured that it would soon be in displays at the football offices and the Broyles Center.

“I think it turned out better than even Sam imagined,” Parkinson said.

That’s about the way the entire 2021 season turned out. No one saw it coming. That’s what will make that team photo so special.