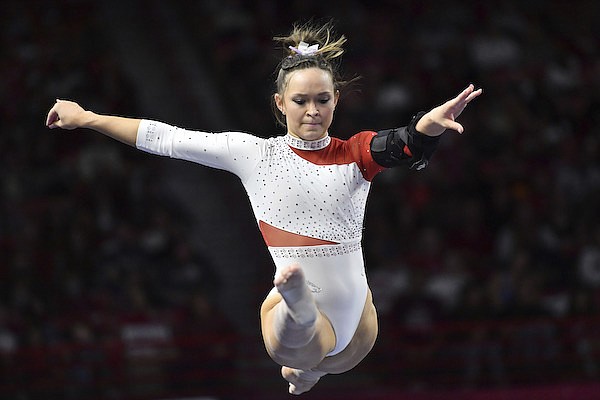 Arkansas gymnast Amanda Elswick performs on the beam against Auburn during an NCAA gymnastics meet on Friday, Jan. 14, 2022, in Fayetteville. (AP Photo/Michael Woods)

The Arkansas Razorbacks finished with a flourish by posting a school record on the balance beam, but the No. 13 University of Arkansas could not hang with No. 4 Florida on Friday night at Gainesville, Fla.

However, Arkansas bounced back to score 49 or better on the remaining rotations, including 49.2 on the floor exercise and the record 49.475 on the beam.

The Razorbacks’ beam effort featured a trio of 9.925 scores from Kennedy Hambrick, Amanda Elswick and Bailey Lovett. Those scores tied Wong for third behind Thomas’ 10 and a 9.975 by the Gators’ Leah Clapper.

The Razorbacks are scheduled to host West Virginia next Friday at 6:45 p.m.