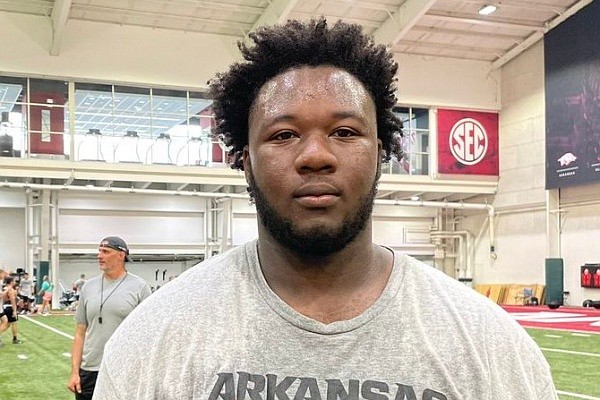 His respect for Razorbacks coach Sam Pittman and offensive line coach Cody Kennedy played a big part of his decision to be a Razorback.

"I just always admired Coach Pitt and I like what Coach Kennedy is doing here so far,” Patterson said. “It's a win-win."

He had offers from LSU, Iowa State, Nebraska, Tennessee, Tulane, Miami (Ohio) and other schools before his one from Arkansas.

Soon after getting the offer from Kennedy, Patterson scheduled an official visit to Fayetteville for the June 24-26 weekend.

"Coach Kennedy really knows what he's talking about,” said Patterson, who played at 370 pounds last year. “I had a chance to be coached by him when I was here at the camp, so I trust he knows what he's doing.”

He is friend with Arkansas redshirt sophomore Jalen St. John, who is a St. Louis native. He was accompanied by his parents on his official visit. He said it was that trip was when he wanted to be a Razorback.

"Probably when I came on my official visit. All the love that was shown around me as soon as I got here," he said.

Rivals rates him a 4-star recruit and the No. 10 interior lineman in the nation. Patterson is the third offensive lineman to pledge to Arkansas and is the 19th prospect in the 2023 class.