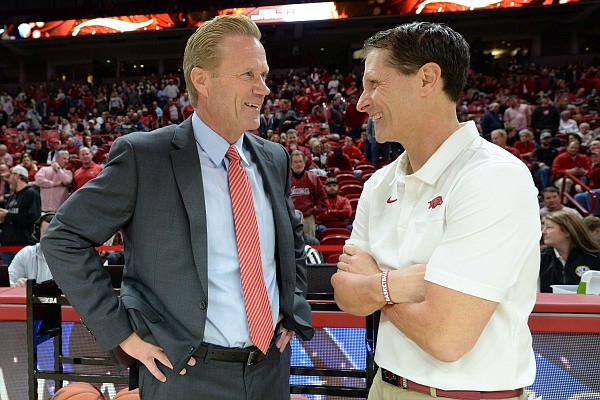 Arkansas coach Eric Musselman and South Dakota's Todd Lee speak Friday, Nov. 22, 2019, before the start of the first half of play in Bud Walton Arena in Fayetteville.

FAYETTEVILLE — Todd Lee is no stranger to Northwest Arkansas.

Fans of Arkansas basketball may recognize the name from South Dakota’s visit to Bud Walton Arena early in the 2019-20 season. At the time, Lee was in Year 2 leading his alma mater and mentoring Stanley Umude, who transferred to play for the Razorbacks in 2021-22.

But he had visited the area many times before. Lee’s parents, the late M.O. and Wanda, lived in Bentonville for 22 years following his father’s retirement.

“They used to come to Hogs games when Coach (Nolan) Richardson was coaching,” Lee said.

Hired on June 10 to Arkansas coach Eric Musselman’s support staff as the Razorbacks’ director of scouting, Lee is thrilled to be back in the region and working with familiar faces and an old friend. Musselman announced the addition three months after Lee and South Dakota parted ways following a four-year run.

The long-time friends who first coached together with the CBA’s Rapid City Thrillers from 1992-94 routinely spoke about again joining forces over the years. For Lee, the timing simply didn’t work.

“It just hasn’t been the right situation. This happens to be the right situation,” Lee said. “I’m really happy to be here and, obviously, I’m just trying to help out in ways that I can, because they’ve done a great job with the program.

“(Musselman and I) stayed friends for that long, and in this business that’s rare. You need people that you can trust and know and believe in their ability. I’m lucky.”

Lee, twice a college head coach who has served as an assistant at five college stops dating back to 1986, will produce post-practice scouting reports and lead in the game planning of Arkansas’ opponents next season. Filling an open position this offseason with a veteran voice and mind was essential for Musselman.

Described by Arkansas’ fourth-year coach as a film-aholic, Lee fit the bill.

“It’s been awesome,” Musselman said of having Lee on staff. “He knows the system inside and out. He’s helped me out a lot already — a lot.”

For example, in his first month on the job, Lee used his experience and knowledge to better the Razorbacks’ open offense, which surfaces when the initial play call in a possession breaks down.

Lee spent time formulating Musselman’s thoughts in those scenarios into rules. From there, he followed up his work with video background.

“I don’t need to change a lot of things, but I’m trying to see what they do offensively and defensively and see what the coaches bring to everything, and then I just try to fit in where I can and help out and give them things that I think would work,” Lee said. “I am an extremely detailed coach — and Coach is, too — but there’s things he’s been doing for a long time.

“They’ve obviously worked. Maybe I can add something, some ideas and things I can bring to the table. I’ve been coaching for a long time and I’m hoping I can help.

"I’ve been a head coach for 12 years, so that helps me be a better assistant or somebody who can help, because I know what he’s going through.”

Lee, too, is learning and growing alongside the 11 new faces on Arkansas’ roster. His observations from practices and workouts are that the Razorbacks are talented, long and athletic.

What has impressed him most is the group's coachability. As a support staffer rather than a head coach, he is intrigued by the opportunity to focus his attention on a few particular aspects of the program.

“That’s different than what you do as a head coach. I’m excited about that.”