McDaniel, team working on 'Before 94' film 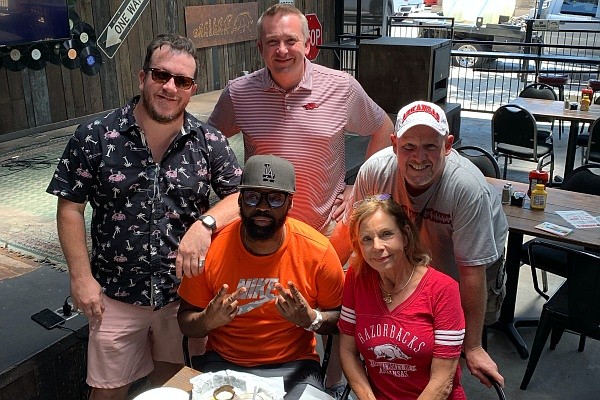 From left to right: Hank Bagwell, Clint McDaniel, Brian Biggs, Ellen Wilbur and Clint Fulmer. The group is working on a documentary on Arkansas basketball that is titled “Before 94.”

The 30-year anniversary of Arkansas’ lone national championship in men’s basketball is less than 21 months away.

And Clint McDaniel, a key figure and stingy on-ball defender on the Razorbacks’ team that defeated Duke 76-72 on April 4, 1994, in the title game in Charlotte, N.C., has a grand plan for when April 2024 rolls around. He is the director/producer of an in-progress documentary on Arkansas basketball that is titled “Before 94.”

McDaniel, 50, said he and his team have been sitting on the project for about three years. Hank Bagwell (director/producer), Brian Biggs (producer), Ellen Wilber (production assistant) and Clint Fulmer (executive producer/producer) are his aides in making the film a reality.

“The inspiration is a lot of stories have been told, but the stories haven’t been told by the actual players,” McDaniel said. “I wanted to make a film that highlighted the players in their own words, their experience and the expectations of going from high school to becoming national champions.

“I wanted to highlight the adversity that the individuals had to go through following the great MayDay era, Oliver Miller era.”

“I just wanted to speak on that gap between that time and to us becoming national champions,” McDaniel added.

McDaniel, who lives in Dallas, said his team has raised roughly $300,000 for the film. The idea for the project stemmed from someone asking him what he would do with $1 million.

“It’s going to take us about 18 months to finish the project then roll it out for the 30-year anniversary.”

McDaniel credits one of his producers for coming up with the film’s title. It is an ideal fit for the story he is attempting to tell.

The relaying of untold stories is what excites the Tulsa native. In addition to speaking with teammates and other former Razorbacks, McDaniel wants to hear from several household names Arkansas faced during its run in the 1990s, including Duke’s Grant Hill and Antonio Lang, and Michigan’s Jalen Rose and Juwan Howard.

Razorbacks guard Scotty Thurman in 1994 hit a go-ahead three-pointer in the championship game from the right wing with 50.7 seconds remaining, releasing the shot just above the outstretched hand of Lang. It gave Arkansas a 73-70 lead.

McDaniel later set the final score after a trip to the free throw line.

“No one has heard (Lang’s) side of the story on living with that shot and being a fingernail from blocking Scotty’s shot,” McDaniel said. “We also want to hear from Jalen and Juwan, because their last game was against the Razorbacks.

“I just want to tell the different impacts that this Arkansas group had leading into the early 90s and the mid-90s, and kind of have a little discussion with Todd Day and Oliver Miller saying what that meant to them to lead the way to that championship. Basically, I just want to get all the input from all the guys and from the fans, as well.”

He added that a couple of fans have been interviewed for insight on what Arkansas’ national championship meant to them. And according to a post to Bagwell's Facebook account, Dwight Stewart, a junior and 27-game starter in the 1993-94 season, was recently interviewed.

McDaniel has visited with Razorbacks coach Eric Musselman and wants him to be involved in the documentary in some capacity.

“We’re still trying to get all the clearance through the university, and once we get all that done then we can move on with discussing different things about different people (we’ve interviewed),” he said. “Just telling the whole story and getting it out is my biggest passion."