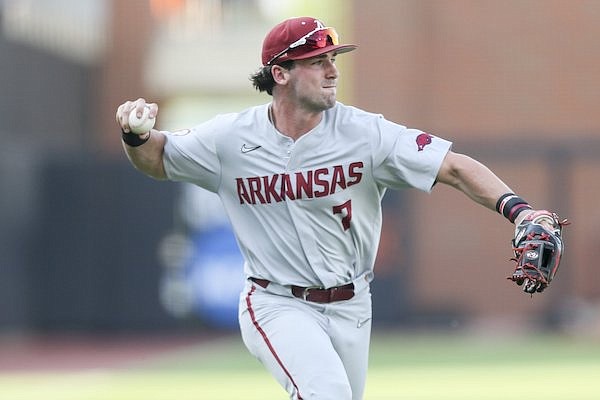 FAYETTEVILLE — It was a busy first night of the MLB Draft for Arkansas’ baseball team.

Arkansas tied for the most players selected on Day 1. Oklahoma, Oregon State, Tennessee and Florida also had three players drafted.

Wallace, who watched the draft with his family at their Greenbrier home, has a slot value of $1.58 million for his place in the draft. The value for Pallette is $1.16 million and the value for Moore is $914,900.

Wallace is Arkansas’ highest sophomore draft pick since Andrew Benintendi was selected seventh overall by the Boston Red Sox in 2015. Benintendi is now a left fielder for the Royals who has been selected to play in the All-Star Game on Tuesday.

Wallace, 20, was eligible for the draft because he will turn 21 on Aug. 7. Draft rules state sophomores can be drafted if their 21st birthday falls within 45 days of the draft.

Arkansas coach Dave Van Horn said since the preseason that he expected Wallace to be a high-round draft pick and sign professionally following his sophomore season.

“He’s going to be picked in the first two rounds, in my opinion,” Van Horn said July 7.

“I love this pick for the Royals,” former Colorado Rockies general manager Dan O’Dowd said on MLB Network’s coverage of the draft. “I think this kid is just scratching the surface. He’s a tick away in pitch recognition skills, to me, from really taking off. He’s got power to all fields. He’s an exceptional athlete.

“There’s just a ton to like about this kid.”

O’Dowd said the Royals got “great surplus value” with their pick of Wallace. MLB.com senior writer Jim Callis said he expected Wallace to be taken about 20 picks earlier in the first round of the draft.

“He looked great in the NCAA postseason with Arkansas going to the College World Series, making great plays at third,” Callis said on MLB Network. “I think he’s an underrated athlete. I think people focus on the power but he’s not just a slugger. At worst he’s a good right fielder, and I think he could be a good third baseman.”

Pallette, a Benton native, was projected to be Arkansas’ No. 1 starting pitcher in 2022, but it was determined shortly before the season that he would require Tommy John surgery on his elbow. Pallette injured his elbow during the final regular-season series of 2021, but was advised against surgery at the time. He began a throwing program last fall in preparation for his junior year.

“He was going to be one of the top-ranked college pitchers that we had on the board if he was healthy,” Baseball America’s Carlos Collazo said on MLB Network. “The White Sox seem to be really targeting guys who have impressive spin and impressive breaking balls. He’s another guy that gets up to 3,000 RPM with that breaking ball. He has an above-average fastball as well; the vertical break of that pitch is really impressive. He has a firm changeup that can be above average.”

Collazo said one of the primary questions about Pallette stems from his relatively low number of innings pitched in college. His freshman season was interrupted by the covid-19 shutdown of the 2020 season and he had a 4.02 ERA in 56 innings as a sophomore in 2021.

“He’s a smaller guy (6-1, 180 pounds), so his durability is going to continue to be a concern,” Collazo said. “If those aren’t questions, his stuff is pretty electric.”

Van Horn said earlier this month that Pallette’s rehab from his surgery has gone well.

Moore, who was the winner of the Rawlings Gold Glove Award for Division I second basemen this year, was drafted as a shortstop. The 20-year-old was eligible for the draft because he graduated high school early and enrolled at Arkansas at midterm prior to the 2020 season.

Callis said he is not surprised Moore was drafted as a shortstop even though he did not play the position much for the Razorbacks. O’Dowd compared Moore to Ray Durham, a two-time All-Star and 14-year MLB veteran.

“He’s a very high energy player,” O’Dowd said. “He’s got power. I think he can play some shortstop. He was a well-above-average Gold Glove second baseman. He can run a little bit and is a very highly intelligent kid with a really high baseball IQ. I think he’s a big leaguer.”

Moore struggled offensively as a junior and finished with a .232 batting average, .801 OPS, 8 home runs and 44 RBI. He tied for the team lead with 42 walks.

"If he would have had a little better year offensively, I think it would have been a slam dunk," Van Horn said earlier this month. "But he still had a lot of good days. He played incredible defense."

Arkansas also had a signee drafted Sunday, right-handed pitcher Cole Phillips of Boerne (Texas) High School who was selected 57th overall by the Atlanta Braves. Phillips underwent Tommy John surgery during the spring. At one point, Phillips was rated a top-25 draft prospect by Baseball America. His slot value is $1.31 million.

“He was on course to be the best Texas pitching prospect since Grayson Rodriguez, who is now with the Royals and is the best pitching prospect in baseball,” Callis said. “He was hitting (100 mph) in the spring. Guys were really excited about him. He had a power slider…and then he blew out the elbow. We’ve talked about this a lot: Tommy John surgery, you feel a lot better about it than say a shoulder injury. Guys come back. I mean, shoot, you go through the rehab and you come back stronger. He might be pushing 101 or 102.”

The 20-round draft will resume Monday with rounds 3 through 10.