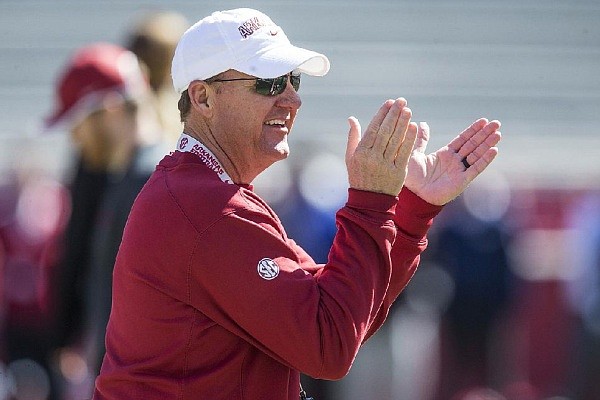 Chad Morris is shown on Saturday, March, 9, 2019, during a spring practice at Razorback Stadium in Fayetteville.

Morris has been hired as a senior offensive analyst at South Florida, the program announced Monday. Bulls coach Jeff Scott and Morris worked together at Clemson from 2011-14 when Morris was the offensive coordinator and Scott was a receivers coach.

Scott was promoted to co-offensive coordinator when Morris left to coach SMU following the 2014 season.

In a statement, Scott said he is eager to have Morris join a staff that is looking to “employ a fast-paced and exciting offense.”

On May 13, Morris resigned as head coach at Texas football power Allen High School after one season. He finished the 2021 season with an 11-3 record.

Morris was hired to lead Allen on March 31, 2021, after one season as offensive coordinator at Auburn under Gus Malzahn.

Arkansas will pay Morris a buyout through December 2023, which is offset by his earnings elsewhere.