2 Razorbacks say they have signed with White Sox 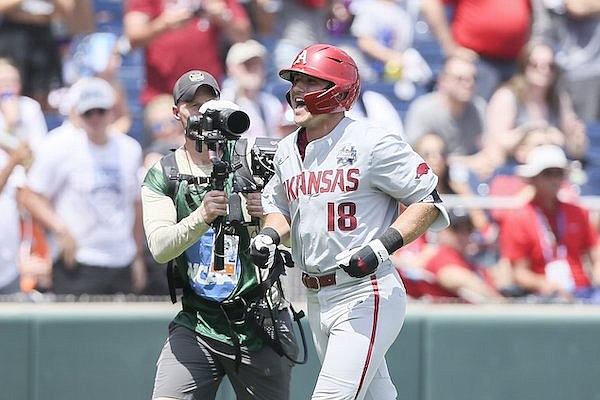 Outfielder Chris Lanzilli and right-handed pitcher Kole Ramage signed undrafted free-agent contracts with the White Sox, they announced on social media. The White Sox have not announced the signings.

"So excited to continue the journey!! Can’t thank the @whitesox enough for giving me this opportunity!!" Ramage wrote.

"So grateful to get a chance to be signing as a Free Agent with the @whitesox," Lanzilli wrote.

Both are expected to report to Birmingham, Ala., this weekend for a physical, according to sources. The White Sox have a Class AA affiliate, the Birmingham Barons, located in the city.

Both Lanzilli and Ramage exhausted their eligibility while playing for the Razorbacks in 2022. Ramage spent five seasons at Arkansas, while Lanzilli transferred to the Razorbacks from Wake Forest following the 2021 season.

Ramage was the Razorbacks’ most-used reliever and finished the season with a 4.80 ERA over 50 2/3 innings and 31 appearances. Ramage’s 94 career appearances rank second all-time at Arkansas, and he and classmate Zebulon Vermillion became the first Razorbacks to be on three teams that played in the College World Series.

Lanzilli and Ramage are the first known Arkansas players to sign contracts since the 20-round MLB Draft concluded Tuesday. The Razorbacks had nine players drafted, including right-handed pitcher Peyton Pallette (second round) and catcher Michael Turner (ninth round) by the White Sox.