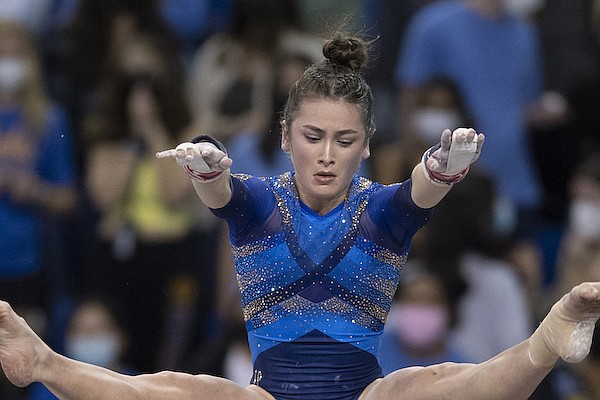 The 5-1 senior had connections to the Arkansas coaching staff in Coach Jordyn Wieber, who was the Bruins’ volunteer assistant coach during Flatley’s freshman season, and assistants Felicia Hano and Kyla Ross, who were UCLA gymnasts her first two seasons there.

“I could not be more thrilled that Norah has chosen Arkansas for the upcoming season, to continue her academic and athletic career,” Wieber said in a statement. “ Norah brings so much to the table, including her performance quality, difficulty, and experience.

“She has already had incredible success and I have no doubt she will bring her competitive spirit and leadership to this program.”

Flatley was named the 2022 Comeback Gymnast of the Year by College Gym News after suffering an ankle injury that shortened her junior year. She posted personal highs in the all-around (39.75), the floor exercise (9.975), the balance beam (9.95) and the vault (9.9) as a senior.

Flatley earned All-Pac 12 honors three times in her first two seasons, twice on the beam and once on the uneven bars, where she was named a regular-season All-American in 2019.