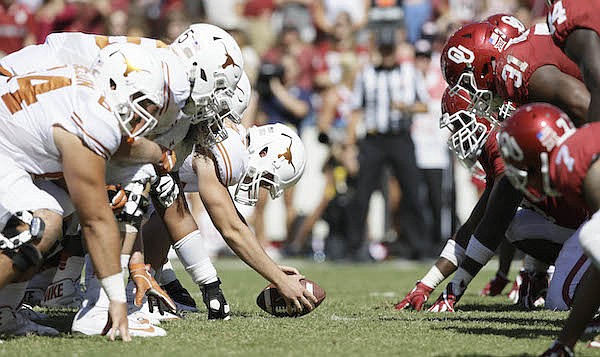 Oklahoma and Texas line up for play during the second half of an NCAA college football game in Dallas Saturday, Oct. 8, 2016. (AP Photo/LM Otero)

A lot of talk is going on at the SEC spring meetings in Destin, Fla., most of it about football and scheduling.

Some teams want a nine-game SEC schedule, others want eight so they can get the home-game payday and a win every year.

It may be nothing is determined this week because all the changes that are coming to the SEC are because Texas and Oklahoma are joining in 2025, although indications are it could be earlier since the Big 12 is adding four new teams next season. So why would they want teams who want out of the league hanging around?

Of course there is the issue of money.

According to the Big 12 bylaws, because the schools each made $38 million last fiscal year that’s how much they would owe the conference.

Not that they can’t afford it, but expect a negotiated buyout and the Longhorns and Sooners joining the league sooner than later.

Understand, money is why both schools are leaving.

Those two got a bigger share of the Big 12 revenue pie than the rest of the members, so they wouldn’t be leaving if they weren’t going to make more. Lots more.

Last year, the SEC signed a $3 billion deal with Disney, and if you think that amount didn’t include Texas and Oklahoma being in the SEC you aren’t paying attention.

The SEC was already the most powerful league in the country, and adding those two giants to its footprint just upped the ante big time.

Of course, there are tons of things to work out before the Longhorns and Sooners are competing on the SEC playing fields, but it does seem like the perfect time to realign the conference.

If they stay in two divisions then obviously UT and OU will want to be in the West — they have no idea what it is like to compete with Alabama every year — which makes geographical sense.

Missouri should be in the West, too, but the simplest solution, and the one that would seem the best for the majority, would be to stay in the East. However, two teams would need to slide toward the sunrise, and what two better to do that than Alabama and Auburn.

The West would have recruiting rich Oklahoma, Texas, Texas A&M and LSU.

The East would have Alabama, Georgia, Florida and Auburn who are in fertile recruiting areas.

That is just a suggestion that most likely will be ignored.

The SEC will continue discussions this week about the future of the league, including schedules, but there is no rush.

Heck, very few even knew Commissioner Greg Sankey was negotiating with Disney until after the deal was done.

The Brandon Burlsworth football camps are this Friday in Harrison (F.S. Garrison Stadium) and Saturday in Little Rock (War Memorial Stadium). Anyone interested can register at burlsworthfoundation.org. The camp is $45 and open to boys and girls 8-15.

Brandon was one of the most unforgettable Arkansas Razorbacks in history.

From walk-on to All-American and third-round draft pick by the Indianapolis Colts.

Former Razorback head coach Danny Ford called him one of the most special players he had ever coached.

Brandon had one scholarship offer coming out of Harrison High — Arkansas Tech — but he was determined to be a Razorback and not only did his hard work pay off, he became a legend among those who knew him.

After he died in a car wreck the summer he was drafted then head coach Houston Nutt enshrined his locker in the old Broyles Complex.

In 2016, the movie “Greater” was released about Brandon’s life and his family.

It should be required viewing for all freshman athletes at every college in America.