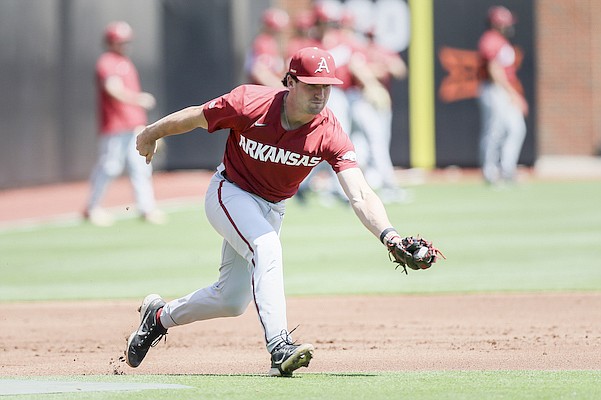 STILLWATER, Okla. — Arkansas’ baseball team has put its struggles of the past month in the rearview mirror heading into Friday’s NCAA regional opener against Grand Canyon.

The late-season struggle cost Arkansas a chance to host a regional. Instead, the Razorbacks will open postseason play at Oklahoma State’s O’Brate Stadium.

“Our thing is it doesn't matter anymore,” Arkansas coach Dave Van Horn said Thursday when asked whether the team feels less pressure because it is not hosting a regional. “What we did, you know, you guys keep bringing it up. Who cares? That’s the way I look at it.

Arkansas pitcher Connor Noland and third baseman Cayden Wallace said the team feels refreshed after some time off that followed a quick exit at the SEC Tournament, where the Razorbacks lost 4-3 to Alabama and 7-5 to Florida. Van Horn gave players last weekend off after they returned from the tournament in Hoover, Ala.

“I felt that was just common sense to give them a break,” Van Horn said.

“Mentally, they knew they didn’t have to be anywhere and could go golf and fish and hang out, relax, just get ready for this week. I think it was a good thing.”

Van Horn called the regional “a new season.” In addition to Grand Canyon, Arkansas is in a double-elimination regional field with Oklahoma State and Missouri State in Stillwater.

“Nobody’s got a batting average here or hasn’t pitched,” Van Horn said, “and it’s all right there in front of us.”

"I think we're ready and have our feet back under us," Noland said.

Arkansas being sent to Oklahoma State’s regional couldn’t have been predicted long ago. On May 9, the Cowboys were No. 3 and the Razorbacks were No. 4 in the USA Today Baseball Coaches Poll following impressive road victories at Texas and Auburn, respectively.

Both teams had losing records in their final 12 games — Oklahoma State was 5-7 — but the Razorbacks’ finish, coupled with the No. 41 score in the Ratings Performance Index, ended their chances of hosting. The Cowboys had the No. 10 RPI.

Oklahoma State coach Josh Holliday was asked if Arkansas felt like an unusual No. 2 seed in a regional.

“They have a heck of a good ball club, I know that,” Holliday said. “They played premier baseball for a long stretch of this season and obviously all of last season. They have a very good team. They’re battle tested, much like we are, having played a very good schedule.

“Everybody is dangerous. I don’t see there being one team that isn’t.”