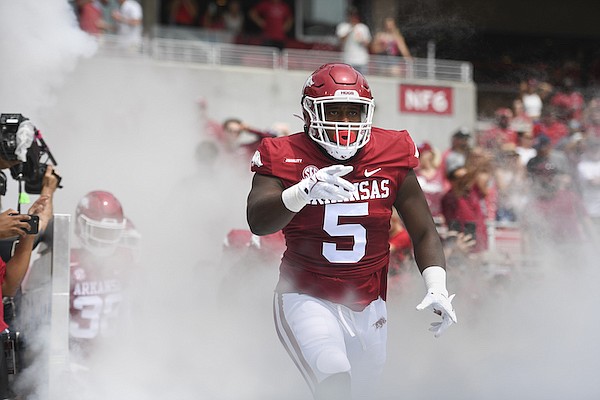 Arkansas defensive end Dorian Gerald runs onto the field prior to a game against Rice on Saturday, Sept. 4, 2021, in Fayetteville.

Gerald, who transferred to Arkansas from College of the Canyons (Calif.) prior to the 2018 season, posted on social media on April 25 he had entered the transfer portal.

However, on Friday, he wrote on Twitter, "After many nights of prayers, and tons of support from my family, coaches and loved ones! I like to finish what I started!! I’ll be finishing my last year of football here at THE University of Arkansas!!"

A UA spokesperson confirmed Friday that Gerald had been granted a seventh season, based on a series of injuries and the covid-19 pandemic season of 2020.

Gerald’s veteran presence should be an asset on an Arkansas defensive line that will be thin entering the 2022 season.

Gerald’s story as a Razorback has been one of injuries, including a broken bone in his leg in practice after last year’s season opener versus Rice.

Gerald had an artery strain in his neck in 2019 that cost him the rest of the year and a leg injury in 2020 that cost him four games.

Gerald had 1.5 sacks in the 2020 season opener against Georgia, a 17-yard sack of D’Wan Mathis and a 6-yard combo sack with Bumper Pool on Stetson Bennett.

His most extensive playing time as a Razorback came in his first season in 2018 when he totaled 275 snaps and posted 21 tackles.

A 4-star prospect as a South Carolina prep legend, Gerald racked up 96 tackles, 43 for loss and 22 sacks in two seasons in the California junior college ranks.