Pittman has proven himself 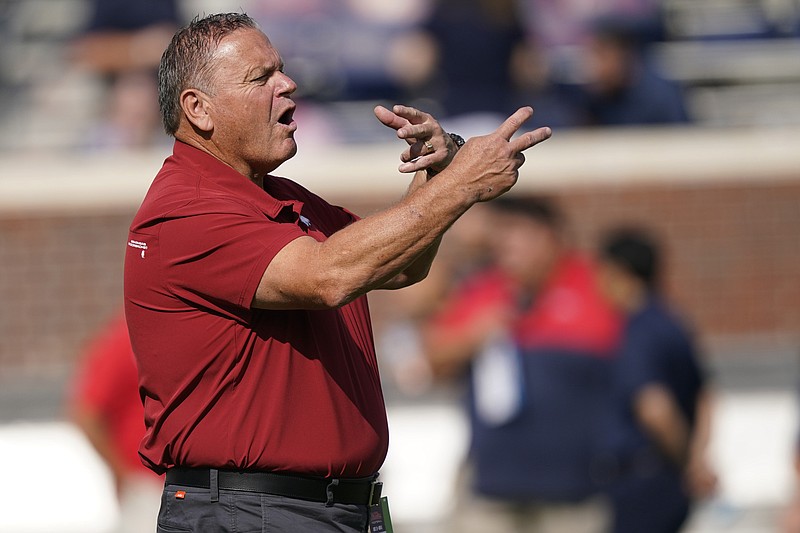 It wasn’t a matter of was Sam Pittman going to get a raise on top of the $750,000 raise he earned by winning nine games last season, it was when and how much.

By today’s standards, Pittman came cheap because the University of Arkansas offered him a chance to be a head coach.

In two seasons, he brought back pride and hope to a Razorback program that had bottomed out under Chad Morris, who is a good guy but doesn’t appear cut from the cloth of a big-time head coach.

Pittman brought with him a natural desire to win.

A natural sense of being able to apply the discipline and still remain a player’s coach. A guy who cares as much about his players off the field as he does on it.

His first season brought the fans relief. He won three SEC games. That was three more than the Hogs had the previous two seasons combined. They had one conference win the season before that.

Last season, they went 8-4 in the regular season and 4-4 in the SEC, earning a first-time bid to the Outback Bowl. Arkansas had options on which bowl they would play, and the Razorbacks chose the New Year’s Day game in Tampa, Fla., where they beat storied Penn State 24-10 in a game that wasn’t as close as the score might indicate.

By then, Pittman had made a hard decision.

He changed agents from the beloved Judy Henry, who helped him get the Arkansas job, to the feared, respected and high-profile Jimmy Sexton.

No one will ever know if Pittman would have gotten the same contract — $5 million a year for five years with incentives that could bring it up to more than $6 million a year — had he not changed agents.

A big part of his decision had to do with assistant coaches.

Sexton represents some of the best assistants in the country, and while he has never said it, at least not publicly, Pittman was planning changes on his staff.

The new raise not only guarantees him a better life and retirement, but it gives him more solidarity in recruiting.

Never again will he have to go into a home and hear he is the 12th highest-paid coach in a league that throws money at coaches like it was sand at the beach.

Some of the coaches, and Pittman will be one of these, earn their millions.

That is millions of dollars annually in tuition, fees and other costs.

At a time when there is a nationwide trend of college enrollments dropping, every school needs every advantage it can get, and prospective students want to have winning football.

Alabama is a good academic school, but no one ever says they are going there to watch a chemistry major do experiments.

Pittman has proven he can win, and even more importantly, he is not afraid to compete on the field or on the recruiting trail.

He may not sign every prospect he gets to visit, but he tries. You can’t hit a home run if you don’t get in the batter’s box.

Only a few will know the exchanges between Arkansas Athletic Director Hunter Yurachek and Sexton, but Yurachek has said since day one at Arkansas that he believes in contracts that have incentives.

That coaches should be paid for winning, not for losing.

Pittman’s new contract is that, and it is retroactive to the first of this year. It may be the last contract he negotiates, or at least one that got as much attention as this one did last December.