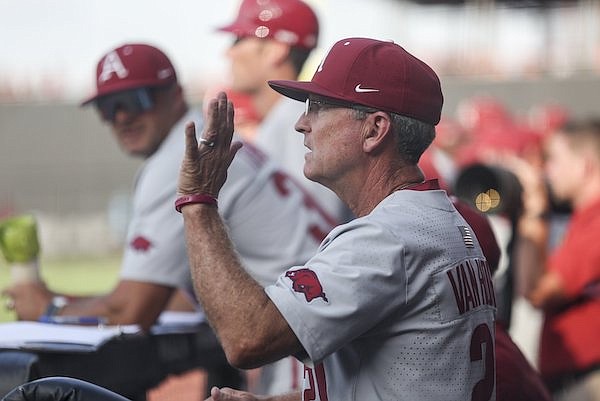 The Razorbacks’ 20-12 victory over Oklahoma State was Van Horn’s 1,161st as an NCAA baseball coach. That tied former Arkansas coach Norm DeBriyn and former Clemson coach Bill Wilhelm for the 34th most in NCAA history.

Van Horn played for DeBriyn at Arkansas in 1982 and spent four seasons as a graduate assistant coach under him from 1985-88. When DeBriyn retired as the Razorbacks’ coach in 2002, Van Horn was hired to replace him.

Van Horn’s NCAA record of 1,161-588 includes 20 seasons at Arkansas, 5 seasons at Nebraska, 3 seasons at Northwestern (La.) State and 1 season at Central Missouri, a Division II program that won a national championship in Van Horn’s only season as coach in 1994. Results at any four-year colleges that compete in the NCAA are recognized in the record book.

Van Horn also won 214 games in five seasons at Texarkana Community College that do not count toward his NCAA record.

When asked Saturday about being in the driver’s seat in Stillwater, Van Horn and Arkansas second baseman Robert Moore alluded to last year’s super regional loss to North Carolina State.

The Razorbacks were one win away from claiming that super regional, but lost a pair of one-run games to the Wolfpack.

“Our guys, they get it,” Van Horn said. “They know that we haven't done anything. They still know some heartbreak from last year. They know what it's all about. You’ve got to finish.”

“Last year everyone had their bags packed to go to Omaha,” Moore said, “and in 48 hours we're done. We haven't done anything yet.”

Van Horn said he expected most of the seven pitchers who threw Saturday would be available again Sunday if needed.

Zack Morris, who threw 49 pitches, would be “iffy,” said Van Horn, who added, “but I think everybody else if we need an inning could give us an inning.”

The Razorbacks are scheduled to play at 6 p.m. against either Oklahoma State or Missouri State. Those teams will play an elimination game Sunday at noon.

Arkansas has not announced a starting pitcher for Sunday’s game, but all indications are that right hander Jaxon Wiggins will get the ball first. Wiggins has been in the Razorbacks’ weekend rotation all season and has not pitched yet in Stillwater.

Wiggins grew up in Roland, Okla., near the Arkansas border.

“Wiggins is chomping at the bit to get in the game,” Van Horn said. “He hasn’t pitched yet this weekend. So I don't think it matters where he's from, he’s just ready to pitch.”

Arkansas right hander Will McEntire recorded the final four outs Saturday, but he was nearly called on much earlier.

McEntire warmed up in the Razorbacks’ bullpen as starter Hagen Smith labored through a 38-pitch first inning. Smith was eventually replaced by Evan Taylor in the second inning, and McEntire didn’t enter until the eighth — more than four hours after he first warmed up.

Van Horn said McEntire’s night displayed how “locked in” he was.

“He just he just wanted the ball,” Van Horn said. “He knew what we needed to help the team, and I think that's kind of what's been going on here the last few days.”

Teams at the Stillwater Regional combined to hit 16 home runs Saturday to bring the two-day regional total to 24 home runs at O’Brate Stadium.

In the earlier game Saturday, Grand Canyon hit four home runs and Missouri State homered three times. All of the Bears’ home runs came in the eighth and ninth innings as they rallied from a six-run deficit to win 8-7.

“It's jumpy right now,” Van Horn said. “I mean, it's that time of the year, you’ve got breeze blowing out. It's not like it's 20 mph, but it's blowing out a little bit and balls are really flying. We notice it in batting practice. We noticed it the other day in our hour-and-15-minute practice and the wind was kind of blowing in from right, but the ball was still traveling.

“I just think it's a little bit of they’ve got some thin air going and guys are locked in all the way around. There's a lot of guys swinging the bats well.”

Arkansas right fielder Chris Lanzilli’s three-run home run in the ninth inning was the 50th of his career.

Lanzill has hit eight home runs in his only season with the Razorbacks. He had 42 home runs during his career at Wake Forest from 2018-21.

Lanzilli is one of eight active Division I players with 50 or more home runs. One of those players is Oklahoma State’s Griffin Doersching, who has 60 career homers.

Arkansas improved to 2-0 at this year’s Stillwater Regional and has won five consecutive postseason games on Oklahoma State’s campus.

The Razorbacks went 3-0 in 2015 when the Cowboys hosted a regional at Reynolds Stadium, their home ballpark that closed when O’Brate Stadium opened last year. Arkansas won games over Oral Roberts (8-6), Oklahoma State (7-5) and St. John’s (4-3).

Arkansas is 2-0 in a regional for the fourth consecutive postseason.

The Razorbacks did not lose a regional game in 2018 or 2019 at Baum-Walker Stadium, and Arkansas went 3-1 during regional play last year when it won its only game against New Jersey Institute of Technology and won twice in three games against Nebraska.

In a game of interest to the Razorbacks, Virginia Commonwealth defeated North Carolina 4-3 on Saturday in the winner’s bracket of the Chapel Hill (N.C.) Regional.

The regional champions in Stillwater and Chapel Hill will meet in a super regional next week.

VCU (42-18) won its 17th consecutive game and, like Arkansas, needs one more victory to clinch the regional title. North Carolina and Georgia will play in an elimination game Sunday, and both teams must win three games in two days to advance to the super regionals.

The regional-host Tar Heels will be without their head coach, Scott Forbes, for the next two games after he was ejected Saturday.

SEC teams went 8-1 in regional play Saturday. The only loss was by Florida, which lost 9-4 on its home field to Oklahoma.

The Razorbacks are among five SEC teams that are 2-0 in their regionals. Tennessee, Texas A&M and Auburn are in the driver’s seat in regionals on their home fields, and LSU has advanced to the championship round at the regional in Hattiesburg, Miss.

Ole Miss is 1-0 in a regional at Coral Gables, Fla., which was delayed by one day due to inclement weather.

Smith had his shortest start of the season on Saturday night when he went 1 1/3 innings against Oklahoma State.

In Smith’s previous 13 starts, the shortest outing had been 2 1/3 innings during Stanford’s 5-0 victory over the Razorbacks on Feb. 27 at Round Rock, Texas.

Prior to Saturday night’s game, Smith’s pitched in relief in his two most recent games, going 1 1/3 innings at Alabama and 1 inning against Florida at the SEC Tournament.

Oklahoma State shortstop Marcus Brown, a sophomore from Springdale who played at Shiloh Christian High School, came up Saturday in the first inning with the bases loaded and two outs.

Smith got Brown on a groundout to third baseman Cayden Wallace, who Brown said is his best friend.

After Wallace fielded Brown’s grounder, he touched third base to end the inning.

Wallace, a sophomore from Greenbrier, and Brown played summer ball together for several years.

Brown also grounded out to Wallace in the second inning.

Lanzilli initially was ruled safe at first base when he led off the second inning with a ground ball that Oklahoma State third baseman Nolan McLean field and made a high throw to first baseman David Mendham.

Mendham made a leaping catch and tagged Lanzilli, but umpire Travis Reininger called him safe.

After a video review, Lanzilli was ruled to be out with Mendham tagging him on the back before he touched the first base bag.

The reversed call might became especially significant when the next batter, Moore, hit a home run.

The Razorbacks jumped out to a 1-0 lead on a home run in the first inning for the second consecutive game.

Brady Slavens hit a home run Saturday night after Wallace hit a home run in the first inning of the Razorbacks’ 7-1 victory over Grand Canyon on Friday.

Wallace, who hit two home runs against Grand Canyon, homered again on Saturday night, to also tie for the team lead with 14.

Van Horn wore a jersey for the first two games of the Stillwater Regional rather than his usual pullover.

“What do you think?” Van Horn said when asked about the wardrobe change. “Yeah, I decided to wear it.”

The Arkansas Democrat-Gazette’s last photo of Van Horn in a jersey top was from the 2017 NCAA Fayetteville Regional finale against Missouri State.

Van Horn now wears No. 21 after wearing No. 2 for his previous 19 seasons as the Razorbacks’ coach.

Shortstop Jalen Battles now wears No. 2 for Arkansas after Van Horn promised it to him if he came back this season rather than turn pro.