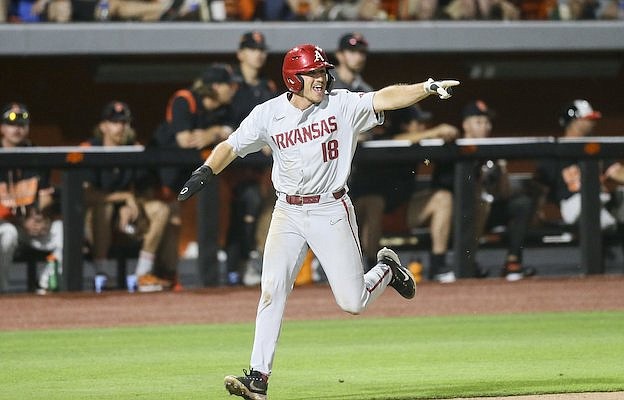 STILLWATER, Okla. — The University of Arkansas baseball team picked a good time to have its highest-scoring inning of the season.

Eight runs in the eighth inning helped carry the Razorbacks to a 20-12 victory over Oklahoma State in the NCAA Stillwater Regional on Saturday night at O’Brate Stadium.

The 20 runs were one shy of Arkansas’ record for its most in an NCAA Tournament game. The Razorbacks beat North Carolina State 21-2 in a super regional game last season. They beat Eastern Kentucky 20-13 in 1985.

Arkansas (40-18) improved to 2-0 in the regional and needs one more victory — tonight against the winner of today’s Oklahoma State-Missouri elimination game or in a Monday night winner-take-all game — to advance to a super regional.

Jalen Battles capped the Razorbacks’ eighth-inning rally with a grand slam after Peyton Stovall started it with a single off Roman Phansalkar, who then hit Zack Gregory and Braydon Webb to load the bases.

“I was looking for a fastball first pitch, and I mean, once I hit it, I kind of blacked out,” Battles said. “It felt good off the bat.

“It was right down the middle. I didn’t miss it.”

Oklahoma State closer Nolan McLean moved from third base to pitch and struck out Brady Slavens for the first out in the eighth. He then walked Cayden Wallace and Michael Turner to score the tying runs.

The struggles continued for McLean as he hit Chris Lanzilli and walked Robert Moore to bring in two more runs.

Trevor Martin replaced McLean, and Battles hammered his first pitch over the left-field fence and into Oklahoma State’s bullpen for a 16-10 Arkansas lead.

The Razorbacks’ previous high for runs in an inning this season was seven in victories over Grambling State (14-1) and the University of Arkansas-Pine Bluff (15-0).

“They went at us with their best guys, and we had some great at-bats,” Moore said of the eighth inning. “Guys not chasing [the pitcher’s] pitch. Then Jalen [hitting the grand slam] was probably my favorite moment as a Razorback.”

Lanzilli hit a three-run home run in the ninth inning and the Razorbacks added a run on an error to make it 20-12.

Will McEntire, the last of seven Arkansas pitchers, went the final 1 1/3 innings after the Cowboys pulled within 16-12 in the eighth inning on a two-run single by Brett Brown off Razorbacks closer Brady Tygart.

“I thought Will was great,” Arkansas Coach Dave Van Horn said. “One reason we wanted to get the ball to him is because he’s proven that he’s just going to be around the plate with everything — fastball, cutter, slider, whatever you want to call it. That’s what he did.”

The Razorbacks hit seven home runs — including two in the seventh inning off Hueston Morrill to pull within 10-8.

Turner homered with two outs to make it 10-6. Lanzilli followed with a double before the switch-hitting Moore hit his second home run of the game.

“That was huge,” Van Horn said. “We were running out of outs, and all of a sudden we’re only down two runs again.

“Then the eighth inning, we were just extremely patient. We took advantage of some things. Jalen had the big swing that really gave us a cushion.”

Tygart left the bases loaded in the seventh inning when he got Chase Atkinson on a groundout to keep the score at 10-8.

“When they got a good pitch to hit, they didn’t miss it because they are a talented bunch of kids,” Oklahoma State Coach Josh Holliday said.

The Razorbacks combined for 16 hits with Lanzilli going 3 for 4 and Stovall going 3 for 5.

Battles, Lanzilli, Moore and Turner each drove in four runs.

Arkansas has to win one more game to take the regional title, while Oklahoma State and Missouri each need to win three more games.

“Obviously it’s the best position to be in of the three teams that are left, but we still have to finish it up,” Van Horn said. “We’ll have an opportunity to watch who we’re going to play tomorrow and then come out and play tomorrow night and get focused in.

“Our guys, they get it. They know that we haven’t done anything. They still know some heartbreak from last year. They know what it’s all about. You’ve got to finish.”

The Razorbacks needed one more win at home over North Carolina State last season to advance to the College World Series in Omaha, Neb., and they lost 6-5 and 3-2.

“Last year everyone had their bags packed to go to Omaha and in 48 hours, we’re done,” Moore said. “We haven’t done anything yet.”

Sophomore right-hander Jaxon Wiggins (6-3, 5.83 ERA) has been Arkansas’ No. 3 starter all season and he’s the logical candidate to go tonight, but Van Horn didn’t make an announcement.

“I’m sure Wiggins is chomping at the bit to get in the game,” Van Horn said. “He hasn’t pitched yet this weekend. … He’s just ready to pitch.”

Oklahoma State scored five runs in the third inning on home runs by McLean and Roc Riggio to take a 7-2 lead.

After Arkansas reliever Evan Taylor hit David Mendham to lead off the bottom of the third, McLean followed with a home run.

Taylor got Marcus Brown on a groundout, then Atkins walked and went to third on a double by Caeden Trenkle.

Zack Morris replaced Taylor and gave up a home run to Riggio. Morris then got Zach Ehrhard and Jake Thompson on strikeouts.

Arkansas pulled within 7-5 with two runs in the fifth inning.

Stovall hit a leadoff single against Oklahoma State starter Justin Campell and went to second on a one-out single by Braydon Webb.

After Slavens grounded out to first base to advance both runners, Wallace was intentionally walked to bring up Turner.

Turner came through with a looping single to shallow center field that scored Stovall and Webb.

In the sixth inning, the Razorbacks had Moore on third base and Gregory on first with two outs when Trenkle made a diving catch in center field to save at least one run.

Oklahoma State extended its lead to 10-5 in the sixth inning when the Cowboys got RBI singles by Atkinson and Riggio against Kole Ramage, who pitched two scoreless innings in the Razorbacks’ 7-1 victory over Grand Canyon on Friday.

Arkansas took a 1-0 lead in the first inning on Slavens’ 14th home run of the season.

Oklahoma State tied it 1-1 in the first when Riggio drew a leadoff walk, went to second on a wild pitch by Hagen Smith, advanced to third on a bunt single by Ehrhard and scored on a throwing error by Wallace at third base.

Smith walked Griffin Doersching and McLean to load the bases with two outs, but he got Marcus Brown on a groundout to Wallace.

Moore hit a home run in the second inning to put Arkansas ahead 2-1.

The Cowboys tied it 2-2 in their half of the second inning when Atkinson walked and went to second base on a sacrifice bunt by Trenkle.

Van Horn then brought in Taylor to replace Smith, a freshman left-hander who went 1 1/3 innings for his shortest start of the season.

Riggio hit a ground-rule double that bounced over the center field wall to score Atkinson.

Taylor walked Ehrhard, but left two runners stranded when he struck out Thompson and got Doersching on a groundout back to the mound.

Arkansas pulled within 7-3 on Wallace’s home run in the fourth inning. It was his 14th home run of the season and third of the regional. He hit two home runs against Grand Canyon.

“Obviously Campbell’s really, really good, and he’s been a great college pitcher,” Moore said. “He’s got three really good pitches, and he’s had success for a reason. We just had to pick something and get on it.”