'We're never out of a game': Hogs' latest big rally comes at most important time 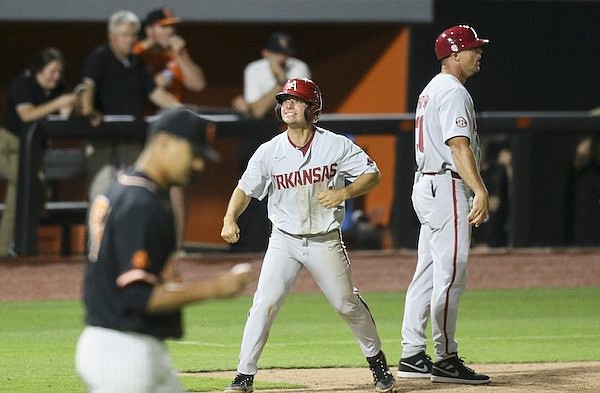 Arkansas' Robert Moore celebrates as he scores a run during an NCAA Tournament game against Oklahoma State on Saturday, June 4, 2022, in Stillwater, Okla.

STILLWATER, Okla. — There was no panic in the Arkansas dugout when the Razorbacks fell behind by five runs Saturday night at Oklahoma State.

Arkansas had been in that situation before this season, albeit never in a game so important.

The Razorbacks’ 20-12 victory over the Cowboys in the NCAA Stillwater Regional was their third this season when trailing by five or more runs. Arkansas also came back from a six-run deficit to beat Arkansas-Little Rock 16-8 on March 29 in Fayetteville, and rallied from a five-run deficit to win 11-8 at Auburn on May 6.

The Razorbacks also came back from a five-run deficit in a May 13 game against Vanderbilt, but lost to the Commodores 9-6 in 10 innings.

“We’re never out of a game,” said Arkansas shortstop Jalen Battles, whose grand slam capped an eight-run eighth inning that saw the Razorbacks go from behind 10-8 to ahead 16-10. “I mean, we trust each other just to battle.”

Unlike the comebacks earlier this season, Arkansas’ deficit against the Cowboys was late in the game. The Razorbacks trailed 10-5 entering the seventh inning after OSU scored three runs in the sixth.

The comeback began with a pair of two-out home runs by Michael Turner and Robert Moore that pulled Arkansas within 10-8.

Dave Van Horn, the Razorbacks’ 20th-year head coach, indicated those swings were the turning point in the game.

“That was huge,” Van Horn said. “We were running out of outs and all of a sudden we're only down two runs again.”

Arkansas put nine runners on base during the eighth inning, including six without a hit. Peyton Stovall led off with a single before the Razorbacks walked three times and were hit three times by a pitch.

Four of the free passes came with the bases loaded, including a walk by Turner to tie the game and a hit by pitch by Chris Lanzilli to give Arkansas an 11-10 lead.

“The reality is the only way you really come back in games where you're down five, six runs is you take your walks, you don't make errors and someone pops a couple balls,” said Moore, who was 2 for 4 with 2 runs and 4 RBI.

Arkansas tied a season-high with seven home runs, including solo homers by Moore, Brady Slavens, Cayden Wallace and Turner. The Razorbacks’ final three homers — by Moore, Battles and Lanzilli — came with runners on base and accounted for nine runs.

All of the multi-run homers came as Arkansas scored 15 runs after the start of the seventh inning. The Razorbacks' 20 runs were one shy of the season high set April 5 against Central Arkansas.

Arkansas trailed by five runs on multiple occasions. Oklahoma State went ahead 7-2 on a pair of home runs by Nolan McLean and Roc Riggio in the third inning.

The Razorbacks chipped away at the lead with Wallace’s solo home run to lead off the fourth and a two-out, two-run single by Turner in the fifth to narrow the deficit to 7-5.

Arkansas out-hit Oklahoma State 16-13, and the Razorbacks reached base 5 times on walks and 7 times on hit batsmen. Every Arkansas hitter reached base at least twice.

“I felt like when we got down early, we just kept fighting,” Van Horn said. “I thought our guys really did a good job at the plate, taking some close pitches, working the count, getting hit by pitches — just doing anything they could to help the team getting on base.”