Time is now to put Hampton in the College HOF 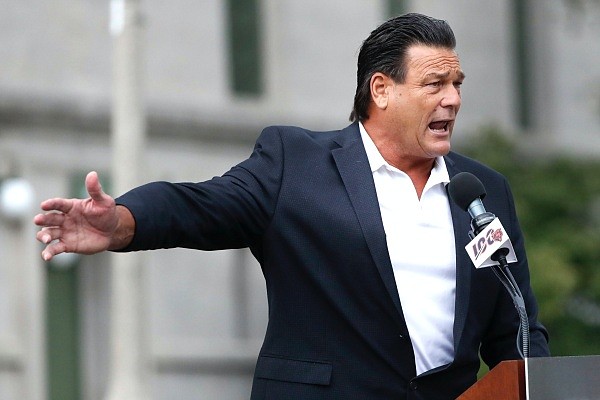 It is always amazing to receive the ballot from the National Football Foundation and College Hall of Fame.

What is amazing is that Dan Hampton is still on the list.

Forget that he’s the only former University of Arkansas Razorback on the ballot, but instead look at his accomplishments on the college football field.

Hampton was simply one of the best defensive linemen to ever play the game, and while the NFL has nothing to do with this Hall of Fame, he proved it again and again with the Chicago Bears.

This is what Hampton’s bio says on the ballot: Arkansas-Defensive Tackle-1978 First Team All-American and two-time All-SWC selection…Named 1978 Houston Post Outstanding Player of the Year in the SWC, recording 18 TFL during his senior campaign…Helped Hogs beat No. 19 Georgia in 1976 Cotton Bowl and No. 2 Oklahoma in 1978 Orange Bowl.

Anyone who reads the bios of the players has to realize just how monumental those two bowl wins were, and Hampton was obviously anchoring the defensive line.

Granted, there are lots of former players on the ballot who deserve induction, such as DeAngelo Williams, who played for Wynne High School and the University of Memphis.

There just isn’t anyone on the list more deserving than Hampton, and here’s to hoping this is the last time that has to be written.

He was better on defense than Tim Tebow was on offense, but Tebow, and probably Reggie Bush, will most likely get the most votes.

Forbes magazine is reporting Rob Walton, son of Walmart founder Sam Walton, is in the process of buying the Denver Broncos.

Walton is worth an estimated $59 billion and is reportedly paying $4.5 billion for the Broncos.

Even if he paid cash for the NFL franchise, he would still be the richest owner in the league.

As of now, David Tepper, owner of the Carolina Panthers, is the richest owner in the NFL, worth a little more than $19 billion.

Walton is a University of Arkansas graduate (1966) and has a law degree from Columbia. He was chairman of Walmart for 23 years.

In the never-ending saga of the NIL — Name, Image and Likeness — comes Ohio State Coach Ryan Day telling a group of boosters that the Buckeyes need $13 million to keep up with other teams.

How long will it take before college players are making more than some NFL players?

At this rate, not very long.

College athletics as a whole seem unconcerned about long games even in the midst of declining attendance at many stadiums.

On the other hand, NFL games run about three hours, and after a successful trial in the minor leagues, the major leagues are taking a big step into keeping fans in the seats by adding a pitch clock next season.

Starting next season, the clock will be set at 14 seconds unless runners are on base, and then it will be 18 seconds.

The batters have until nine seconds are on the clock to get in the box and get set.

As for the NBA, history has shown it could eliminate the first three quarters because it appears the players don’t put forth maximum effort until the final 12 minutes.