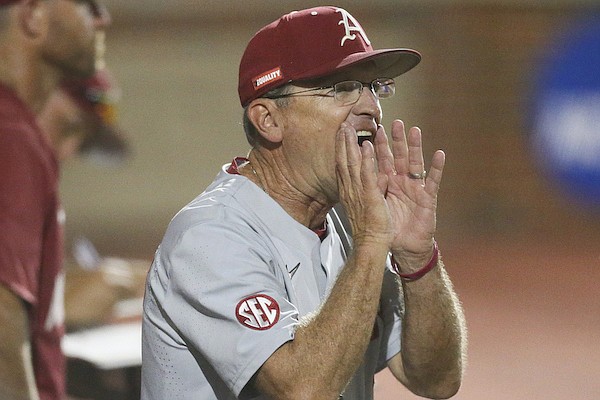 Arkansas coach Dave Van Horn yells to his players during an NCAA Tournament game against Oklahoma State on Monday, June 6, 2022, in Stillwater, Okla.

His bleached yellow mullet flowed from the back of his Oklahoma State baseball cap.

You could almost sense the smile on his face. Or maybe a sneer.

The night before, Roc Riggio had stared into the Arkansas Razorbacks’ dugout and then backed up his bravado with three hits in six at-bats — including a home run and a double — in the 14-10, 10-inning Cowboys win at the NCAA Stillwater (Okla.) Regional.

There he was again Monday night in the bottom of the eighth with the bases loaded and the Cowboys down 5-3 in the deciding game of the series. Two out and Riggio was probably trying to decide if he would prance or dance around the bases for his hometowners after he hit his grand slam.

Understand, Riggio is just a freshman, 19 years old. So the immaturity was as obvious as his talent, and he is talented.

This was the defining moment of the game for the scrambling Razorbacks and the hard-hitting Cowboys, who had combined to score 65 runs before this winner-take-all showdown.

Freshman Hagen Smith was on the mound for the Razorbacks. Usually a weekend starter who had made it just 1 1/3 innings in his start Saturday against the Cowboys and was pulled after four walks and a hit that resulted in two runs.

Arkansas won that game 20-12, but Riggio had gone 4 for 5 and drove in 5 runs, so all of the Razorbacks were well aware of him.

If Riggio was in Smith’s head, it didn’t show.

Maybe because he knew him a little.

In high school, they made their official visit to Arkansas together.

Smith, from Bullard, Texas, came right at Riggio on Monday night and caught him swinging on a 2-2 fastball that left the Cowboys’ second baseman on one knee.

It was the pivotal pitch of the game.

Smith would be the Razorbacks’ final pitcher of the night, striking out two more in the ninth for the 7-3 win and his first save of the season.

The win advanced the Razorbacks to a super regional at Chapel Hill, N.C., where they will face North Carolina on Saturday in the best-of-three series.

The winner, of course, goes to the College World Series.

Arkansas is one of five SEC teams who advanced to super regionals as the league went 5-4 in regional play.

The Razorbacks and the Rebels won on the road.

LSU, Vanderbilt and Georgia lost on the road, and Florida fell to Oklahoma at Gainesville.

It is not a shocker that four of the SEC’s five teams are from the West division.

The Vols dominated the East, but the West had more balance and it was a dogfight most of the season.

Going into the regionals, the Razorbacks had lost six of eight games but snapped out of the slump by winning three of four.

North Carolina went 42-20 this season and finished fourth in the Coastal Division of the ACC with a 15-15 record.

But they were 33-7 at home and won the ACC Tournament.

Still, for the Razorbacks to go on the road in a hostile environment and win three of four was an indication of how gritty this team can be.

Dave Van Horn had no doubts left after the Hogs lost to OSU on Sunday and it appeared the Razorbacks were short on pitching. He texted his pitchers asking how they felt.

Almost all of them answered immediately that they felt good.

Then in the eighth inning, facing an ultra dangerous hitter, Smith — who had started a little slow with a walk and a hit batter — stared down the clutch hitter.

In the end, there would be no prancing or midnight dancing, just the Hogs celebrating, surviving and advancing.