Owens-Delerme to compete with birthday buddy for decathlon title 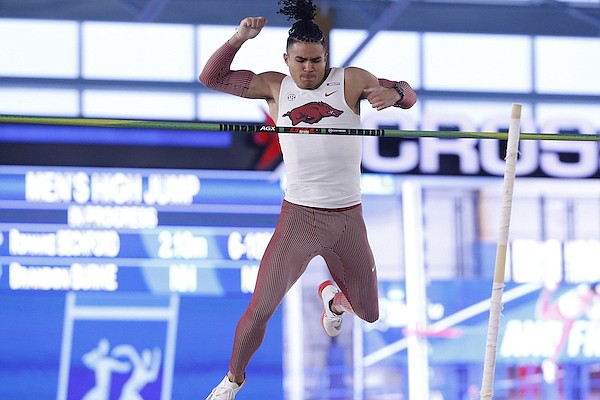 Arkansas heptathlete Ayden Owens competes in the pole vault during the NCAA Indoor Track and Field Championships on Saturday, March 12, 2022, in Birmingham, Ala.

FAYETTEVILLE — The nation’s top two collegiate decathletes were born the same day on opposite sides of Pennsylvania.

University of Arkansas junior Ayden Owens-Delerme, who on April 15 set the collegiate decathlon record by scoring 8,528 points in the Mount San Antonio College Relays in Walnut, Calif., was born May 28, 2000, in Pittsburgh.

Georgia junior Kyle Garland, who broke Owens-Delerme’s collegiate record by scoring 8,720 points on May 7 to finish second at the USA Championships held at Arkansas’ John McDonnell Field, was born May 28, 2000, in Philadelphia.

“Obviously it’s an amazing coincidence,” said Razorbacks assistant coach Travis Geopfert, who coaches Owens-Delerme. “That just adds to the fact that you’ve got the two best ever in NCAA history about to duke it out. The whole thing is pretty cool.”

Owens-Delerme and Garland are set to compete in the decathlon at the NCAA Championships beginning today at Hayward Field in Eugene, Ore.

“It’s very competitive, but it’s respectful,” Owens-Delerme said of going against Garland. “The decathlon community is kind of like a family. Everyone is friendly. It’s not cutthroat.”

Owens-Delerme and Garland began competing at national junior events in the decathlon in 2016.

“That’s how we found out we have the same birthday. It’s absolutely insane.”

Owens-Delerme, who competes internationally for Puerto Rico because that’s where his mother was born, watched Garland break his collegiate record at the USA Championships.

“I wasn’t a surprise,” Owens-Delerme said. “I knew the record wasn’t going to hang around for long, that it was going to be broken again by me or Kyle or someone else.”

Owens-Delerme said he won’t be surprised if it takes setting another collegiate record to win the NCAA decathlon title.

“I think it’ll just keep going up and up,” Owens-Delerme said. “That’s the plan at least. To keep pushing the bar higher and higher.”

Owens-Delerme, 6-2, and Garland, 6-5, bring different strengths to the decathlon.

“Both are tremendous athletes, but Kyle’s strengths are the throws,” Geopfert said. “Ayden’s running events are his best.”

“Kyle is definitely bigger in stature than I am, he’s stronger than I am,” Owens-Delerme said. “Anything that involves running on the track, those are my strengths by far.

“Mostly you focus on yourself and just try to put together the best 10 events you can and see what happens at the end of it.”

Owens-Delerme wanted to get away from the cold winters in Pittsburgh and began his collegiate career at Southern California. He said he enjoyed the warmth of Los Angeles, but coaching turnover with the Trojans was an issue.

Before Owens-Delerme arrived on the USC campus, the coach who recruited him, Sheldon Blockberger, left for Arizona. Then Blockberger’s replacement, Carjay Lyles, left for Mississippi State.

“The multi position at USC was just a little too unstable,” Owens told the Pittsburgh Journal-Review when he transferred to Michigan after the 2019 season. “For my long-term success, I felt like I needed one decathlon coach who could really get me to the next level, and I felt like USC wasn’t really the best place for that.”

Owens-Delerme said he enjoyed his two years at Michigan, but his coach there, Jerry Clayton, left last year for LSU.

When Owens-Delerme graduated from Michigan with a degree in linguistics and entered the transfer portal, he narrowed his choices to Arkansas and LSU with three indoor seasons and two outdoors of eligibility remaining.

Meeting Geopfert, who this year returned to Arkansas for his second stint as an assistant after being at Tennessee, made the difference.

“I almost went to LSU to stay with something familiar,” said Owens-Delerme, who is working towards a master’s degree in business at Arkansas. “I had to decide between staying with my old coach or trying something new.

“I kind of rolled the dice and said, ‘OK, I’m going to trust this new guy,’ and it’s working out. Coach Geopfert was the guy I wanted to get coached by, and I took that leap of faith.

“I’m in great hands now. Arkansas is the best place I’ve been so far. Coach Geopfert has been smart about my training and kept me healthy.”

Geopfert was a decathlete at Northern Iowa. He competed in 54 decathlons.

“I’ve had some experiences that these athletes are going through,” Geopfert said. “I completely understand what it’s like to go through the rigors and the training. Through that experience, I’ve also learned what not to do. We want to train intelligently.”

At the NCAA Indoor Championships this year, Owens-Delerme won the heptathlon with 6,211 points to edge Garland, who was second with 6,200.

“It was great to win a national title indoors,” Owens-Delerme said. “I think it’ll go down to the wire again in Eugene between us.”

Garland said he’s looking forward to the competition with his long-time friendly rival. After the NCAA meet, they’ll also both be in the decathlon at the World Championships.

“For us to be the top two scorers in NCAA history, to share this stage with a guy like Ayden, is absolutely incredible,” Garland said. “We’re both going to put up extremely high scores.”