Men's officials can issue tech for flopping in 2022-23 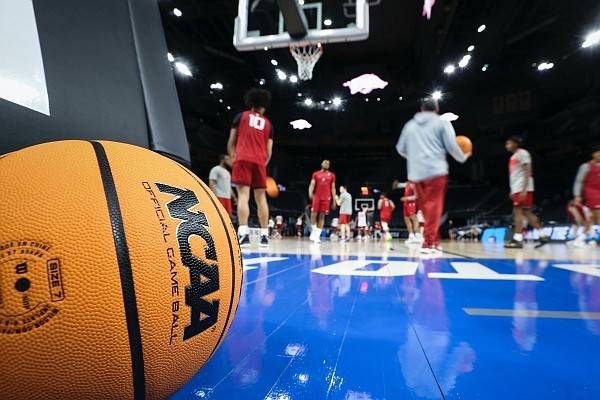 An NCAA basketball is shown on Wednesday, March 23, 2022, during a practice before the Sweet 16 round of the 2022 NCAA Division 1 Men's Basketball Championship at Chase Center in San Francisco, Calif. Check out nwaonline.com/220324Daily/ and nwadg.com/photos for the photo gallery.

Beginning in the 2022-23 season, men's college basketball officials may assess a technical foul to a player who fakes being fouled.

The NCAA Playing Rules Oversight Panel approved Thursday a proposal that came from the NCAA Men’s Basketball Rules Committee. According to an NCAA release, if a player is called for flopping, the opposing team would shoot one free throw.

In previous seasons, officials would issue a warning for flopping and could issue a technical foul if a similar occurrence took place later in a game.

"We didn't feel like we were getting the results that we wanted with the warnings," Bob Huggins, committee chair and West Virginia head coach, said in May. "Our goal is to continue to try to get flopping out of the game.

“The committee believes giving the officials the ability to call a Class B technical foul the first time they see a player faking being fouled, it will be more of a deterrent."

In the release, committee members defined flopping as “an unsporting act that occurs when a player attempts to influence an official's judgment by creating an appearance that a foul has been committed when there has been incidental or no contact.”

Additionally, conferences and the National Invitation Tournament may experiment with five media timeouts upon the first dead-ball stoppage under 17, 14, 11, 8 and 4 minutes in the second halves of games.

According to the release, the rationale is to “help the flow of the game so commercial breaks will not be taken when teams use their allotted timeouts.”

Media timeouts have taken place at the first stoppage under 16, 12, 8 and 4 minutes in each half.

The NCAA Playing Rules Oversight Panel also approved continuing experimental technology rules for conferences to allow teams to view live video and preloaded video on their bench for the upcoming season so long as the conference submits a waiver request. The experimental rule will be allowed in multi-team events and the 2023 NIT.