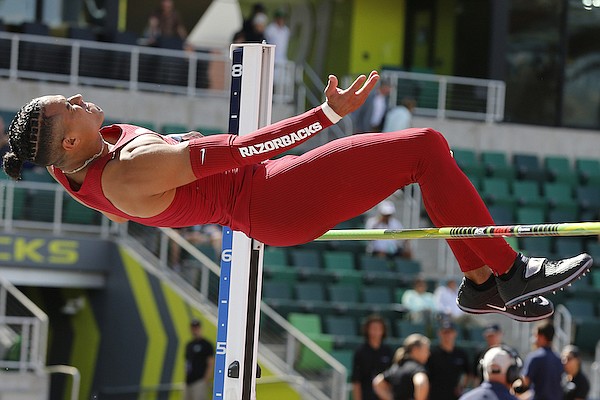 University of Arkansas junior Ayden Owens-Delerme started and finished fast to take the first-day lead Wednesday in the decathlon at the NCAA Outdoor Track and Field Championships in Eugene, Ore.

Owens-Delerme moved into first place after the 400 with 4,490 points — 49 ahead of Georgia sophomore Kyle Garland.

Garland set a collegiate record in the decathlon with 8,720 points when he finished second in the USA Championships on May 7 at Arkansas’ John McDonnell Field. He broke the collegiate record of 8,528 points by Owens-Delerme in the Mount San Antonio College Relays in Walnut, Calif., on April 15.

Arkansas junior Daniel Spejcher is 15th in the decathlon with 3,910 points.

Pascoe, of Conway, finished 11th in the same event last year and took first in the steeplechase at the Sun Belt Conference outdoor championships last month. He placed fifth in his 12-man heat, automatically qualifying for the final. Pascoe is the first Red Wolf to qualify for consecutive national finals since Donnie Taylor in 1977-78.

Even with a strong final lap of 1:05.63, Pascoe was 11-plus seconds behind Montana State’s Duncan Hamilton, who led the field of 24 semifinalists. The 12-man final is set for Friday.

Razorbacks junior Tre’Bien Gilbert ran 13.55 in the 110-meter hurdles semifinals and missed advancing to the final by .01 of a second. Arkansas junior Matthew Lewis-Banks ran 14.09.