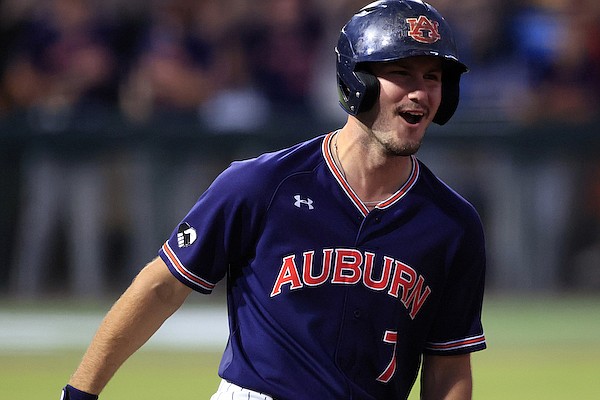 Auburn infielder Cole Foster (7) runs to first after hitting a home run during an NCAA baseball game on Friday, June 3, 2022 in Auburn, Ala. (AP Photo/Butch Dill)

FAYETTEVILLE — There were growing rumblings from about the midway point of conference play that the Southeastern Conference was lacking in quality depth behind national front-runner Tennessee, which won the SEC regular-season and tournament titles, and is the odds-on favorite to win the College World Series.

Yet the SEC flexed its collective muscle at NCAA regionals last weekend, qualifying five of the 16 teams in this weekend’s NCAA super regionals.

Hosts Tennessee (the national No. 1 seed), Texas A&M (5 seed) and Auburn (14) all advanced, in addition to second-seeded Arkansas and third-seeded Ole Miss.

Host and No. 13 national seed Florida did not advance, but the Gators reached a regional final before losing, as did two seeds LSU and Vanderbilt.

The rugged SEC West placed more than half its members into the final 16, accounting for a full quarter of the remaining teams. SEC West champion Texas A&M, runner-up Arkansas, fourth-place Auburn and fifth-place Ole Miss spoke to the strength of the division.

So the SEC is alive and well aiming for a three-peat as College World Series champion, all with different teams. Defending NCAA champion Mississippi State did not qualify for the NCAA Tournament after finishing last in the SEC West, and 2019 champion Vanderbilt is out after falling to host Oregon State at the Corvallis Regional. The CWS was not played during the covid-19 surge of 2020.

Tennessee, which entered the NCAA Tournament with an SEC-record 53 wins, was clearly expected to make a postseason run after leading the nation in home runs and earned run average.

Coach Tony Vitello’s Volunteers (56-7) could not repeat the feat of 2021 Arkansas and 2013 Vanderbilt in winning all 10 SEC series this season, but they have the power and pitching depth profile that fits a potential CWS champion. Tennessee, which has five fewer losses than the next-lowest remaining team (Virginia Tech at 44-12) will host Notre Dame (38-14), the winner of the Statesboro (Ga.) Regional starting Friday.

Auburn (40-19) also swept its regional against Southeastern Louisiana, Florida State and UCLA by a combined score of 51-18. The Tigers travel to No. 3 seed Oregon State for their super regional, starting Saturday.

The Razorbacks (41-19) had lost 6 of 8 games heading into the regional at Oklahoma State, but they blew up for 44 runs in 4 games and beat the Cowboys in 2 of 3 meetings to move on to face North Carolina in a series that starts Saturday.

Ole Miss (35-22) was the only SEC team outside of a No. 1 or No. 2 seed to make it out of the weekend. The Rebels were not projected to make the NCAA Tournament after losing 2 of 3 at Arkansas on April 29-May 1, but they rallied to win 8 of their last 10 regular-season games to earn an at-large berth. That stretch included a seven-game winning streak that featured sweeps of Missouri and at LSU, as well as a 4-1 victory at Southern Miss on May 11.

Ole Miss returns to Hattiesburg this weekend for a set against the No. 11 seed Golden Eagles that begins Saturday.

The Razorbacks, Rebels and Auburn are all on the same side of the bracket, while Tennessee and Texas A&M are on the other side.

In the non-SEC related super regionals, 8 seed East Carolina hosts 9 seed Texas starting Friday; Oklahoma travels to Virginia Tech for a Friday start; and Stanford hosts UConn beginning Saturday. The Stanford-UConn winner will meet the Arkansas-North Carolina winner in the first round of the College World Series in Omaha, Neb.