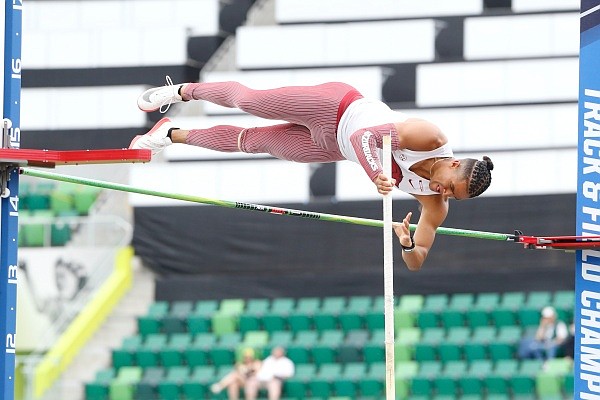 Arkansas' Ayden Owens-Delerme competes in the pole vault on June 9, 2022, at the NCAA Outdoor Track and Field Championships at Hayward Field in Eugene, Ore.

Owens-Delerme scored 8,457 points, matching the meet record, to win the decathlon at the NCAA Outdoor Track and Field Championships on Thursday night at Hayward Field in Eugene, Ore.

It was the second NCAA title for Owens-Delerme this year along with winning the heptathlon at the indoor championships.

Going into the 1,500, the final event, Owens-Delerme had 7,709 points — an 11-point lead over Texas sophomore Leo Neugebauer.

Garland broke Owens-Delerme’s collegiate record by scoring 8,720 points on May 7 to finish second at the USA Champions held at Arkansas’ John McDonnell Field.

Owens-Delerme had set the record of 8,578 points on April 15 at the Mount San Antonio College Relays in Walnut, Calif.

Fassold, the SEC champion competing just two hours from her hometown of Hillsboro, Ore., missed two attempts at 15-1. Her final attempt was a miss at 15-3.

Louisville senior Gabriel Leon won with a clearance of 15-1.

Arkansas junior Lauren Gregory did not finish the 10,000.

Sophomore Britton Wilson ran 54.72 in the 400-meter hurdles to advance to the final for the Razorbacks.

Wilson, a transfer from Tennessee, is the national leader this season with a 53.75 she ran to win the SEC title.

Florida sophomore Anna Hall, who won the heptathlon at the USA Champions, had the top qualifying time in the 400 hurdles at 54.48

Wilson ended Thursday night’s events by anchoring Arkansas to a qualifying time of 3:27.52 in the 1,600 relay. She ran 50.77 seconds on her split for a team that included senior Morgan Burks-Magee, freshman Rosey Effiong and senior Jada Baylark.

Senior Logan Jolly ran an Arkansas school-record 9:38.13 in the 3,000-meter steeplechase semifinals to lead all qualifiers for the final. She broke the mark of Krissy Gear, who ran 9:38.62 last year.