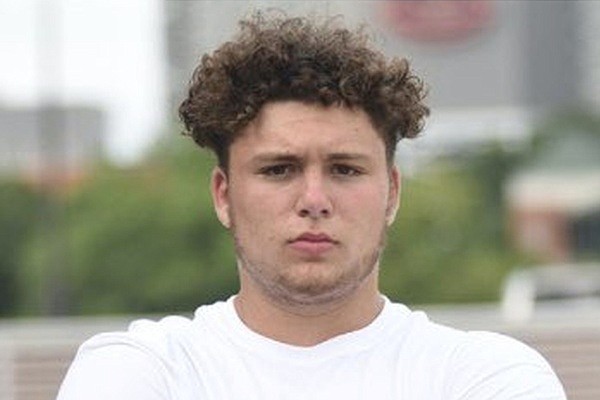 ESPN 4-star offensive lineman Madden Sanker will make his first trip to Arkansas this weekend for an official visit.

Sanker, 6-4, 305 pounds, of Douglasville (Ga.) South Paulding, made an official visit to Michigan State last weekend and the trip to Fayetteville will be his second official.

“I really want to get to know the coaches more because it’s my first time out there,” Sanker said of Arkansas. “I want to talk to them and to some of the players and see what they have to say about Coach Pittman since he’s been there.”

Sanker, who has been selected to play in the 2023 Under Armour All-American Game in Orlando, Fla., has more than 25 scholarship offers from schools such as Arkansas, Georgia, Ole Miss, Louisville, Auburn, Purdue, Tennessee, Michigan State, Mississippi State and Miami.

ESPN also rates him the No. 5 offensive guard and No. 130 overall prospect in the nation for the 2023 class. He is the No. 13 prospect in Georgia.

His parents, Mark and Jenna, will accompany him on his visit to Fayetteville. Sanker has been talking to some Razorbacks commitments, including quarterback pledge Malachi Singleton.

Singleton as well as his teammate and junior athlete David Eziomume will be making unofficial visits to Arkansas this weekend.

“He loves it over there,” Sanker said of Singleton. “He’s only had good things to say about it.”

He has made unofficial visits to Louisville, Michigan State, Mississippi State, Ole Miss, Miami and North Carolina this spring. He will officially visit Louisville next weekend and Miami on June 23.

Sanker is undecided if he will take his fifth official visit.

Pittman and Kennedy’s ability to develop top linemen is a major attraction.

“They’ve put multiple centers and guards in the league and that’s what I plan on playing,” Sanker said. “They’ve produced multiple first-, second-round and third-round draft picks in the league that are similar to how I play, so I know they’re able to develop and they’re really good people.”

Sanker, who is an outstanding wrestler, went 24-1 and won his second consecutive Class 6A state title in the 285-pound division earlier this year.

“Hopefully, I can make a decision in July or August,” Sanker said.

The recruiting process can be many things, including fun and exciting while also challenging. Sanker was quick to point out the toughest part.

“Having to telling programs no,” he said.

Sanker plans to graduate in December and enroll at his new school in January.