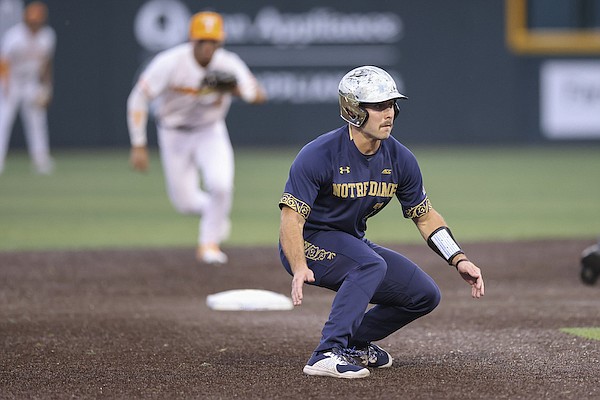 KNOXVILLE, Tenn. — Carter Putz hit a two-run home run in the first inning, Notre Dame matched its season-high with four home runs, and the Fighting Irish beat No. 1 seed Tennessee 8-6 on Friday night in the opener of the Knoxville Super Regional.

This super regional pitted college baseball's winningest programs since the start of the 2020 season by winning percentage with the Vols first and Notre Dame second.

Notre Dame moved a win away from advancing to the College World Series by scoring every run off a homer against the nation's best home-run hitting team. The Irish ranked 78th nationally with 68 home runs.

Jared Miller made it 3-0 with a home run in the second in his first at-bat this postseason after playing only defense during the regional.

Jack Zyska put Notre Dame up 5-0 with a two-run homer in the third as Tennessee pitcher Blade Tidwell matched the three home runs he allowed through 36 innings this season. Notre Dame kept slugging, and Jack Brannigan’s three-run homer gave the Irish an 8-1 lead for the biggest deficit Tennessee has faced this season.

This was the Vols' first loss in seven games in the super regionals and first in Knoxville after 12 straight NCAA postseason wins.

Centerfielder Drew Gilbert was ejected in the fifth for criticizing a strike with pitching coach Frank Anderson tossed for running on the field with coach Tony Vitello. That means both Gilbert, Tennessee's clean-up hitter, and Anderson will miss Game 2 on Saturday.

Peyton Manning was in the stands for this game with the berth in Omaha on the line in this series. Not that he helped.

Trey Lipscomb and Jorel Ortega each hit solo home runs for the Vols, who came in leading the nation with 150 home runs. Lipscomb's two-run double in the seventh pulled the Vols within 8-5. Jordan Beck added a home run in the ninth.

Aggies win on 2-out hit in 9th

COLLEGE STATION, Texas — Catcher Troy Claunch singled with two outs and the bases loaded in the bottom of the ninth inning and No. 5 overall seed Texas A&M stranded 17 runners on base before posting a 5-4 victory over No. 12 seed Louisville in the first round of the College Station Super Regional on Friday night.

Texas A&M (41-18) and Louisville (42-20-1) will play again Saturday. A win by the Aggies would send them to the College World Series for a seventh time. A win by the Cardinals, aiming for their sixth CWS appearance, would force a winner-take-all game on Sunday.

Claunch gave Texas A&M a 1-0 lead in the bottom of the first when he was hit by a pitch with the bases loaded and two outs.

The Cardinals got a two-run single from Logan Beard and a sacrifice fly from Ben Bianco in the top of the second to grab a 3-1 lead.

Brett Minnich doubled with two outs and scored on a single by Jordan Thompson in the third to pull the Aggies within a run.

Ben Metzinger doubled in a run in the fifth to put the Cardinals up 4-2, but Thompson tied the game with a home run in the seventh — after Claunch led off with a single.

Claunch's game-winning hit came after Louisville reliever Michael Prosecky loaded the bases on a single, walk and a hit batter. Prosecky (2-1) came on in the eighth with one out and one on via a walk and walked two more before striking out Kole Kaler to end the threat.

Jacob Palisch (6-3) pitched two scoreless innings in relief to get the win. The Aggies finished the game with 11 hits, 10 walks and had four batters hit by pitches.

The best-of-three series continues on Saturday with Oklahoma (41-21) seeking its 11th College World Series appearance, and first since 2010.

Bennett won his ninth game of the season and Trevin Michael picked up his 10th save. Michael struck out the side in the eighth and made it four straight strikeouts in the ninth before getting some help on the final out when John Spikerman made a diving catch in right.

Brett Squires hit a two-out RBI single in the sixth and later scored from first on Pettis’ single to give Oklahoma 5-0 lead.

Carson Jones and Jack Hurley each hit a two-run homer in back-to-back innings to get Virginia Tech (44-13) within 5-4 in the seventh.

Virginia Tech starter Griffin Green (7-2) hit the first two batters of the second inning and was pulled before Oklahoma scored two runs for a 3-0 lead. Reliever Henry Weycker went a career-long 4 2/3 innings to keep the Hokies in it.

GREENVILLE, N.C. — Bryson Worrell had four hits for the second straight game and East Carolina used a five-run eighth inning to beat Texas 13-7 on Friday in the opening game of the Greenville Super Regional.

East Carolina (46-19), looking to reach its first College World Series, played in front of its largest crowd (5,723) at Clark-LeClair Stadium. The Pirates are now 2-12 in their seven super-regional appearances.

Alec Makarewicz highlighted the eighth inning. He made a diving stop with a runner on third for the third out and he led off the bottom half with a fortunate home run to give ECU a 9-7 lead. His long shot to left-center field appeared to be caught by Douglas Hodo III, but it popped out of his glove and went over the wall. Jacob Jenkins-Cowart added a two-run double later in the inning.

Worrell went 4 for 5 with a home run, two RBIs and four runs scored to reach 11 hits and five homers in five games of the NCAA Tournament. Jenkins-Cowart added four RBIs and Jacob Starling had three.

ECU starter C.J. Mayhue (6-1) struck out nine in five innings while allowing four earned runs, and Zach Agnos picked up his third save.

Murphy Stehly opened the scoring for Texas (45-20) with a two-run homer in the top of the first. ECU answered with three in the bottom of the frame. Stehly added his 19th home run in the sixth. Hodo and Ivan Melendez also homered.