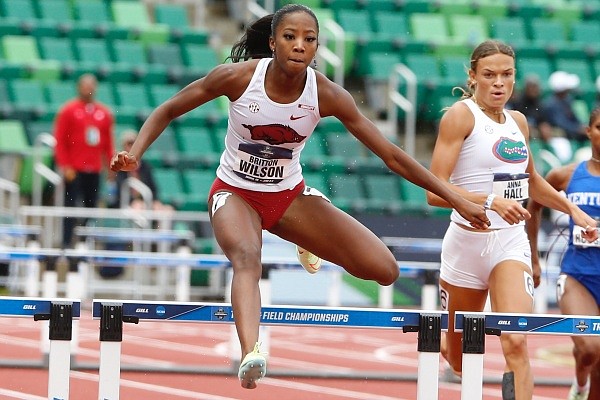 Britton Wilson won the 400-meter hurdles on Saturday at the NCAA Outdoor Track and Field Championships at Hayward Field in Eugene, Ore.

Britton Wilson capped her first season at the University of Arkansas as a national champion.

Wilson, a sophomore who transferred to Arkansas this year from Tennessee, won the 400-meter hurdles on Saturday night at the NCAA Outdoor Track and Field Championships at Hayward Field in Eugene, Ore.

Texas was second in women’s standings with 64 points, while Kentucky was third with 50 points. LSU and Texas A&M tied for fourth with 39 points.

Wilson, who failed to qualify for the NCAA meet at Tennessee last year, blossomed this year working with Arkansas assistant coach Chris Johnson. She won the SEC 400 hurdles title last month, running a UA school record 53.75 that is the top collegiate time this season.

At Tennessee, Wilson didn’t improve on her times from Mills Godwin High School in Virginia.

The 5-5 Wilson became the first athlete in the 41 years of the women’s SEC Outdoor Championships to win the 400 meters and 400 hurdles. She won the 400 in an Arkansas school record 50.05.

The Razorbacks had two scorers in the 5,000 with junior Lauren Gregory finishing fifth in 15:28.33 and sophomore Isabel Van Camp taking eighth in 15:36.

Senior Logan Jolly took seventh in the 3,000-meter steeplechase and broke her own Arkansas school record by running 9:34.76. She ran 9:38.13 in Thursday night’s semifinals to break Gear’s record of 9:38.62 last year.