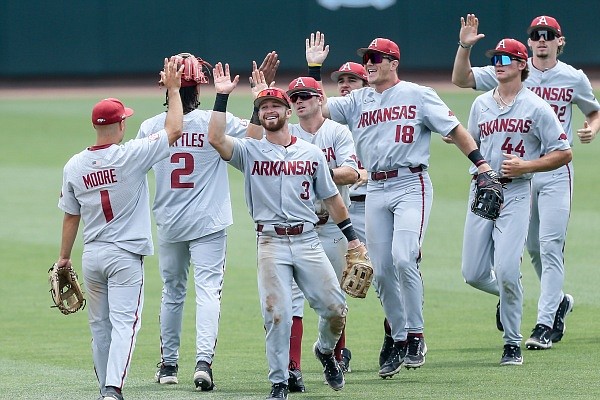 Arkansas players high five on Saturday, June 11, 2022, after the ninth inning of the NCAA Baseball Super Regional opening game at Boshamer Stadium in Chapel Hill, NC. Check out nwaonline.com/220612Daily/ and nwadg.com/photos for the photo gallery.

Saturday was a full day of perspiring arts.

It started with the Arkansas Razorbacks baseball team taking on North Carolina in the NCAA super regionals at 10 a.m. Central time.

The Razorbacks were back at their hotel and thinking about needing one more win over the Tar Heels today at noon to advance to the College World Series by the time the Belmont Stakes was run.

And by then, people were assembling for the All-Arkansas Preps awards banquet at the State House Convention Center in Little Rock.

The Razorbacks won it in the fifth inning when they broke a scoreless game into a 3-0 lead.

Peyton Stovall started it with a solo home run and feeding off that, the Hogs added two more, got an insurance run in the seventh and playing error-less ball coasted home.

More from WholeHogSports: Hogs' old QB knows how to take a hit

Connor Noland was in control on the mound as the Hogs’ ace struck out 6, allowed 6 hits and walked just 1.

It was the second weekend in a row the Razorbacks went on the road and took control of a regional tournament. After a slow finish to the regular season and the SEC Tournament, the Hogs have won four of their past five games.

As for the Belmont, it appeared on a course to be anticlimactic until the racing gods decided otherwise.

Mo Donegal took the lead away from We the People at the head of the stretch and never looked back.

Ortiz piloted a faster pace, stalking the leaders instead of hanging close to the rear like he did in the Kentucky Derby when he was anywhere from 19th to 14th until he tried to a move behind a block of tiring horses.

Nest, a filly, passed tiring horses to give the connections the exacta.

Rich Strike, the stunning winner of the Kentucky Derby at 80-1 odds, was never a factor and in fact was acting up before the race.

He was a fairy tale come true at the time, having been claimed eight months prior to the Derby for $30,000.

Then his owner made an unorthodox move and kicked thoroughbred racing in the shins. Richard Dawson announced they would not be going to the Preakness.

Just like that there would be no horse trying to win the coveted Triple Crown.

More from WholeHogSports: Razorbacks find themselves in same scenario as 2021

So Rich Strike was off the day Early Voting won Preakness.

The idea, of course, was to give him plenty of time to rest up for the 11/2-mile Belmont. But traditionally only losers skip the Preakness, and it turned out it didn’t matter.

There was some local interest as We the People and Barber Road wintered in Hot Springs at Oaklawn Racing Casino Resort and had some success. We the People set the pace Saturday, as expected and like so many before him didn’t have the stamina to get the distance.

Barber Road, who was a closing second to Cyberknife in the Arkansas Derby and a closing sixth in the Run for the Roses when he was 11-wide, ran seventh most of the way but had little left for the stretch run that has turned dreams into nightmares for scores of previous Belmont hopefuls.

The day wrapped up with more than 400 Arkansas coaches and athletes being honored at the All-Arkansas Preps banquet.