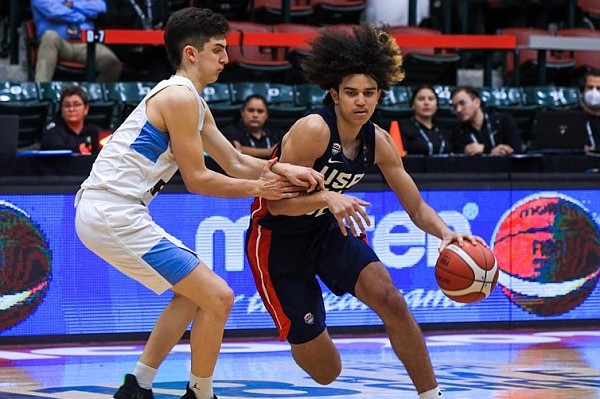 Anthony Black drives the ball against Argentina on June 11, 2022, in the semifinal round at the FIBA U18 Americas Championship in Tijuana, Mexico.

Arkansas basketball signee Anthony Black will soon join Eric Musselman and the Razorbacks in Fayetteville with a gold medal to his credit.

Team USA on Sunday night cruised to the FIBA U18 Americas Championship title with a convincing 102-60 victory over Brazil in Tijuana, Mexico. It marks the program’s sixth consecutive gold medal at the event and 10th since 1990.

Team USA was led in the game by Villanova signee Cam Whitmore and Oregon signee Kel’el Ware, a former standout at North Little Rock. They combined for 51 points on 22 of 32 shooting and 18 rebounds.

Black finished the six-game run with 4 points, 5 rebounds, 3 assists against 1 turnover, and 1 block and 1 steal. He had a team-best plus/minus rating of plus-29 in his 17:15 in the lineup.

Among those on Team USA who played in each game, Black led the way with 7.8 rebounds and 4.2 assists per game over 19.9 minutes. His 47 total rebounds, 25 assists and 12 blocks were team highs.

Black also tied for the team lead with 11 steals, averaged 5 points on 34.3% shooting and was third in total minutes played (120).

The 6-7 guard’s highlights during the trip included a 10-point, 11-rebound double-double against Puerto Rico to close group play and another 11-rebound outing in the quarterfinal win over Mexico.

In the semifinal round against Argentina, Black blocked five shots, tying a USA Basketball Men’s U18 single-game record set by James Banks in 2016.

Black also rejected two shots against Mexico and three in a win over Ecuador, and had seven assists vs. Puerto Rico.