It’s no accident the Hogs are back in Omaha 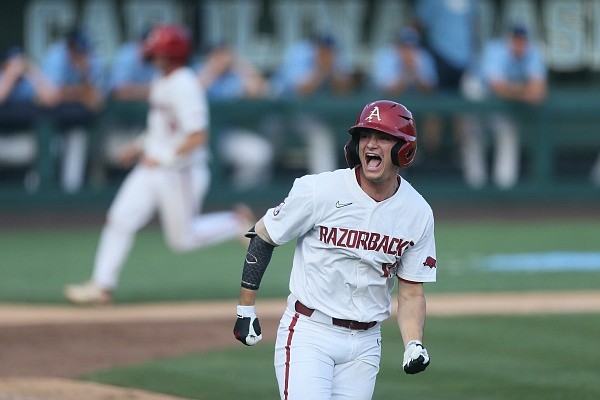 Arkansas Brady Slavens (17) celebrates, Sunday, June 12, 2022 at the end of the 9th inning during the NCAA Baseball Super Regional game 2 at Boshamer Stadium in Chapel Hill, NC. Check out nwaonline.com/220613Daily/ and nwadg.com/photos for a photo gallery.

They are playing with reckless abandon.

The Arkansas Razorbacks, who swept North Carolina in the super regionals in Chapel Hill, had a flawless weekend defensively, and on offense they were swinging sharply and smartly.

Take a first pitch? Not if the batter likes it.

It seems rather obvious that since the SEC Tournament when they lost to No. 11 seed Alabama and No. 7 seed Florida the mindset has changed.

A few naysayers questioned Van Horn after the two losses that cost them a chance to host a regional. Even a player was called out on an afternoon radio show in Northwest Arkansas.

Van Horn and Co. hunkered down. They had each other’s backs.

More from WholeHogSports: What to know about Stanford, Arkansas' first opponent in Omaha

All they had to do was get back to being the team that respects everyone and fears no one.

In Stillwater, home of the Oklahoma State Cowboys, who tied for second for the Big 12 regular-season championship with Omaha-bound Oklahoma, the Hogs were thought to be beatable.

Instead, they topped Grand Canyon, beat the Pokes in a 20-12 shootout, lost 14-10 in 10 innings to OSU and then put their nose to the grindstone.

With timely hitting and freshman Hagen Smith throwing two innings of shutout baseball, striking out four, the Hogs advanced to play North Carolina with a 7-3 win.

They have played three errorless games in a row.

They have celebrated as a team every step of the way and now they are again the OmaHogs.

This will be Van Horn’s seventh time to lead the Razorbacks to the College World Series and three times in the last five seasons.

It is his ninth trip there as a head coach.

He’s a youthful 61 and will most likely coach until he decides to hang ’em up. It will be on his terms.

He and Norm DeBriyn have been a knockout one-two punch for the University of Arkansas.

DeBriyn, who was a driver’s education teacher when John Barnhill hired him, won 1,161 games in his 33 years as the Razorbacks’ skipper.

He handed the program off to his former player and pupil Van Horn in 2003. And when he handed it off, he butted out completely as anything but a fan and supporter.

Since 1970 when DeBriyn was hired, Arkansas has had 10, not counting interims, head football coaches and seven head basketball coaches.

Plus, he’s been able to recruit nationally to help further compete on a nationwide level.

Some believe Van Horn’s willingness to play in-state teams could have hurt the Hogs.

They won all the games, but it didn’t help their RPI.

However, it obviously didn’t hurt enough to deny them a trip to the College World Series.

They did it the old-fashioned way, playing excellent defense and not wasting baserunners.

After the SEC Tournament it appeared the team had taken a wrong turn and was headed nowhere.

Instead, it proved to be a speed bump.

When the skies were cloudy, Van Horn pulled his team up by believing in them.

At one point they had lost six of eight. Now, they have won five of six and are headed back to college baseball’s dream destination.

Getting to the finish line is never easy. There are no gimmes in the field of eight and with Tennessee out, it appears to be a wide-open tournament.