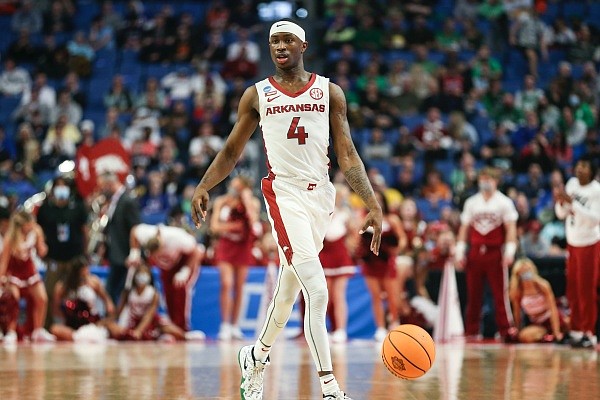 Arkansas guard Davonte Davis looks for an opening, Thursday, March 17, 2022, during the first half of the first round of the 2022 NCAA Division I Men's Basketball Championship at KeyBank Center in Buffalo, N.Y.

FAYETTEVILLE — Arkansas' roster for the 2022-23 season was finalized when Jaylin Williams announced in late May that he would go all in on the upcoming NBA Draft, which is set for June 23.

Razorbacks coach Eric Musselman did not waste time working on this roster, either. Only a few days after the program's loss to Duke in the Elite Eight, he added Missouri forward Trevon Brazile.

Brazile, a sophomore who had a solid freshman season for a bad Tigers team, was the first of five commitments from the NCAA transfer portal. The group joins the nation's No. 2 recruiting class and a pair of scholarship returnees in guard Davonte Davis and forward Kamani Johnson.

Expectations for Arkansas are as high as they have been since the mid-1990s. The Razorbacks will likely be comfortably in the top 15 of preseason polls and in the top 10 of others.

Roughly five months out from Game 1 and inside two months from a foreign tour that will go a long way with team camaraderie, I did my best to project what the Razorbacks' rotation could look like, breaking down roles into four tiers – star potential, potential starter, bench player and fighting for minutes.

While the roster is littered with talent, consider this: Musselman has played fewer than 10 players in 70 of 101 games at Arkansas.

A go-to player who could turn in an All-SEC type season.

Rationale: This feels like a fairly obvious placement for Smith, who in May was named the No. 1 player in the class of 2022 by 247 Sports. Smith is an Alpha-type personality and an ultra-competitive player who hates to lose – perhaps more than he enjoys winning. With a terrific ability to score, above-average court vision and a want to lead, Smith seems to have everything a team would want in a go-to player. His long arms also aid him as a defender. In each of Musselman’s seasons with the Razorbacks, he has had a player in the SEC player of the year conversation – Mason Jones, Moses Moody, JD Notae. It is in no way out of the realm of possibility for Smith, a standout on the high school all-star circuit in the spring and possibly a preseason All-American, to find himself there, too, by the end of the regular season.

These players could start and are expected to play an integral role in team success. They have a great chance to play significant, meaningful minutes.

Rationale: Black, a 6-7 guard, would bring tremendous value to the starting lineup. He can impact games whether he starts or comes off the bench, but with his attributes and intangibles he will be a challenge to keep off the floor. Black needs some work in terms of jump shooting (10/28 2FG, 1/6 3FG in Mexico), but his six-game run with Team USA at the FIBA U18 Americas Championship in Tijuana proves he can influence winning in a variety of ways beyond scoring. He led the team in total rebounds, assists and blocks, and tied for the team lead with 11 steals. Black’s defensive numbers should not come as a huge surprise given how big he is on the ball, much like a number of Arkansas’ wings in 2021-22. Depending on an opponent’s lineup, he could defend 4-5 positions. There is something to be said for a guard who can stand out in his role and be content getting teammates going offensively. The Razorbacks will enjoy his advance passes that kickstart transition opportunities, and he has a nice floater game once in the lane. Black arrived on campus earlier this week.

Rationale: Walsh was one of 17 finalists for USA’s U18 National Team, but ultimately was not selected. However, he was able to join the Razorbacks in Fayetteville to get acclimated and a head start on the summer months. Musselman has spoken glowingly about what Walsh brings to the table. Another long wing, he is a violent and rangy defender who stabs at the ball with purpose, corrals loose balls and can also check several positions. On the other end he challenges defenders at the rim. Walsh finishes well through contact. He also has point guard qualities and routinely looks to push pace and for teammates in the open floor. Earlier this summer he was regarded as the top two-way player in the 2022 class.

Rationale: An exceptional athlete who may have one of the best bodies on the roster, Council is already making waves in the Razorbacks’ workouts. Musselman recently posted a clip of the wing shot faking an Arkansas big and driving middle then throwing down a dunk in traffic. Council appears to thrive in the open floor offensively, and he can create for himself off the dribble. Some of his production stems from the defensive end, where he flashes quick hands and solid instincts. With his athleticism and 6-10 wingspan, there is thought that he could fill the void left by Au’Diese Toney, who declared for the NBA Draft and was Arkansas’ premier perimeter defender when it mattered most. On paper, outside shooting and turnovers — 12 of 46 from three in conference play last season and three or more turnovers in 12 games — are something of an issue. But Musselman has been able to develop, maximize strengths and mask deficiencies of some of his more talented transfer additions. And Council is talented. According to one American Athletic Conference coach, the Wichita State transfer was the top NBA prospect in the league last season. Council could be one of the team’s minutes leaders.

Rationale: With Musselman as the Razorbacks’ coach, expect lineups to feature a forward who has the ability to stretch the floor and protect the rim in his own way. Jaylin Williams was often Arkansas’ last line of defense in 2021-22 and he made a name for himself taking charges around the restricted area. Williams blocked his share of shots, but Brazile is more of a traditional rim protector — 10.1% block rate was No. 28 nationally, according to KenPom data — and he showcased he can play that role while limiting foul trouble. CBB Analytics data shows he averaged 1.5 blocks per foul committed. Musselman in February before the Razorbacks faced Missouri said Brazile has a bright future ahead. The coach is now hands-on with the promising big, who is only entering Year 2 at the college level. Defensively, he can switch onto a bigger guard and match up with multiple positions. He is a solid offensive rebounder and effective finisher at the rim — 40 of 53 (75.5%) last season on attempts within four feet. Brazile, so long as he grasps new concepts this summer, seems like a player who could be a defensive anchor in the frontcourt. Missouri’s opponents last season shot nearly 3% worse inside the arc and 4% worse beyond it with Brazile in the lineup, according to Hoop Lens analytics.

Rationale: Each season I believe there will be a star-caliber player in Musselman’s transfer class. Last year, it was Stanley Umude. He may not have reached star status at Arkansas, but when he played well the Razorbacks typically did, too. With time, I think Graham is the guy in this haul. A second-team all-conference performer at Arizona State in 2021-22, he was described by The Athletic’s CJ Moore and Sam Vecenie as a tough-shot specialist. Graham is expected to bring some shot blocking and make plays in the open floor when any of the Razorbacks’ pace-pushing guards look to run. Graham’s ceiling could hinge on his effectiveness in the half court. He is not a threat from deep and some of his best avenues to score are unorthodox, according to those who have covered him. It isn’t exactly an apples-to-apples comparison, but Justin Smith was somewhat limited offensively when he arrived at Arkansas from Indiana. But he developed well on that end and even added a shot to his repertoire. If Graham grows his offensive game a bit and shows continued commitment to defense, he can be a star.

These players could start games this season, but I believe they will likely come off the bench.

Rationale: The third-year guard should be the tone-setter in regards to program expectations and be a leader for newcomers to look to to see how things are done. His leadership is paramount since he has spent the most time of any player on the roster with Musselman and the coaching staff. From a statistical perspective, Davis took a step back in some ways last season compared to his freshman year. The Razorbacks lacking a true pass-first point guard likely contributed to some of his offensive struggles. But Davis still had a key role during the NCAA Tournament run in March doing very 2021 Davis-like things such as corralling loose balls, making home-run plays and hitting mid-range jumpers. He was a jolt of energy at times and a solid secondary playmaker, and I see him playing a similar role next season. A career 8.4-point per game scorer with big-game experience is nice to have at your disposal. Musselman likes being able to glance at his bench and know he has a burst of energy or offense/defense ready and waiting.

Rationale: The Mitchell twins will be two of the more interesting players to learn about in the coming months. As I wrote in their commitment analysis, both can provide good-to-great size, shot blocking and versatility to Musselman’s lineups. On paper, it appears Makhel has slightly more upside given he finished in the top 20 nationally in block rate last season, according to KenPom, has been a key part of a team’s offense for multiple seasons and is less turnover prone. He fancies himself a back-to-the-basket big and an aggressive rebounder. Makhel in 2021-22 finished 68% of 132 attempts at the rim. But above all else he has an affinity for the defensive end, which is a really good way to get on the floor at Arkansas these days. Makhi landed in the top 10 in Atlantic 10 play in block and steal rate, which is impressive. Arkansas would not have brought both players in if it did not believe they could impact winning. But playing time, as Musselman likes to say, is earned behind closed doors. If Graham and Brazile do grab hold of starting roles, having 6-9 and 6-10 replace them off the bench sounds ideal, but we will see how that ultimately play out. I envision Makhel having a greater role, and Makhi could wind up in the next category.

These players may have an uphill battle to crack the rotation.

Rationale: Like Davis, what Johnson has on all of the new frontcourt players is an understanding of the Razorbacks’ schemes and non-negotiables. He brings a unique form of physicality as an undersized forward and rebounds in bursts and at a good clip when on the floor (13.5 per 40 minutes), but is limited offensively. He averaged 7.9 minutes last season on a team that needed a bit more frontline depth. Arkansas’ offseason additions can provide more. But a player like Johnson can certainly be valuable in pockets during a long season.

Rationale: The Razorbacks’ roster is loaded with talent and playmakers, and it may take time for this trio. With Dunning and Ford, I am curious to learn how their games, which were partly based on power at the high school level, will translate to college against bigger, stronger and faster opponents. Pinion has deep range, but Jaxson Robinson was an example last season in that being a sharpshooter doesn’t immediately equate to playing time. Each of these players can be terrific and productive in the long term.