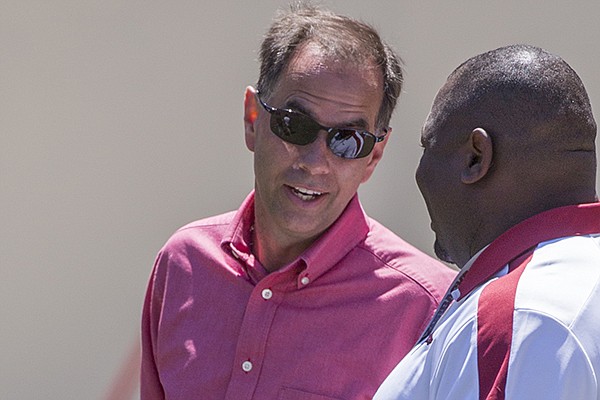 FAYETTEVILLE — University of Arkansas Athletic Director Hunter Yurachek has lost one of his top aides and a right-hand man with the departure of Jon Fagg, a longtime Razorback administrator who is taking over the top position at Texas-Arlington.

Fagg served on Yurachek’s senior staff as deputy athletic director for academics, integrity and student-athlete development, and had expertise in many areas of the department, including compliance and the new Name, Image and Likeness segment.

He might be best known by Arkansas fans for the role he played in helping bring Sam Pittman aboard as football coach in December 2019.

Fagg served on the three-man search committee with Yurachek and UA Board of Trustee and former Razorback Steve Cox that interviewed candidates from the East Coast to Washington that winter before identifying Pittman as their recommendation to take the reins for the Razorbacks.

Pittman recently agreed to a new five-year deal with a base pay of $5 million and an annual average of $6.2 million with retention bonuses added in after leading Arkansas to a 9-4 record in his second season.

Hired at Arkansas in the summer of 2008 by former athletic director Jeff Long, who had taken over for the legendary Frank Broyles on Jan. 1, 2008, and after serving seven years at North Carolina State, Fagg had been sport administrator for men’s basketball before taking over as administrator for football and the swimming and diving program.

Fagg thanked the UA and the athletic department in a Twitter post after Texas-Arlington announced his hiring on Tuesday.

“Can’t begin to thank [the Razorbacks and the UA] enough for the incredible honor to serve the department, university, NWA & the GREAT state of Arkansas!” Fagg wrote. “My family & I will be forever grateful for the opportunity given to be a part of this incredible thing called Razorback Nation!”

The Texas-Arlington athletic department shared a quote from Fagg as part of its social media announcement of his hiring: “It’s more than winning and losing, it’s about making memories.”

Fagg, a University of Arizona graduate, has a rich background in athletics inherited from his football coach father. He spent many of his formative years in Hawaii, where he graduated from the Punahou School.

He also had stints at Fresno State and for the Big South Conference as director of compliance and spent time as a graduate assistant and student assistant at Arizona and Davidson as a football coach before moving on to Mars Hill College.