Field is wide open at the College World Series 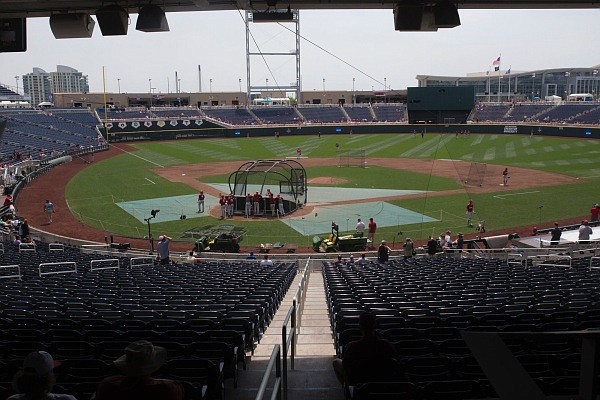 Arkansas Razorbacks players warm up before a baseball game, Monday, June 17, 2019, at the TD Ameritrade Park in Omaha, Neb.

Odds on the 2022 College World Series are varied.

One online betting service has Arkansas as the fourth favorite despite opening with Stanford, which is the second favorite on their board.

A reader sent a different website’s odds that had the Razorbacks the second favorite just ahead of Stanford.

Texas was favored on both sites.

Texas A&M is the last choice, and Oklahoma and Auburn are sixth or seventh depending the website.

Ole Miss is fifth on both sites.

Southland Casino Racing, Saracen Casino Resort and Oaklawn Racing Casino Resort have their own lines and are taking bets on the College World Series.

Before the season began, the Razorbacks were 13-1 to win it all and for sure several Hog fans made wagers.

Arkansas lost to Stanford 5-0 earlier in the season, but the Hogs were held to three hits and that doesn’t seem likely at this point in the season.

Having been to Omaha a few times, it should be pointed out it has grown into a really nice city.

Used to be if you weren’t at the ballpark, your entertainment options were at Cascio’s Steakhouse or driving by and looking at Boy’s Town.

That was all there was to do there.

The Old Market has revitalized the downtown area with restaurants, bars and shopping.

Across the river in Council Bluffs, Iowa, are casinos.

Be prepared for outrageous prices on rooms if you can find one.

My first trip had a three-day rain delay that flooded my first floor hotel room and there was no possibility of moving. But the hotel helped out with extra towels to dry my feet before getting in bed.

Brandon Marcello, who once covered sports for the Arkansas Democrat-Gazette, has a great story on KJ Jefferson at 247 Sports.

Since leaving Arkansas, the Mississippi native has gotten married, had a child and when he was promoted he was told he could live anywhere he wanted as long as it had an airport nearby.

He chose the Fayetteville area.