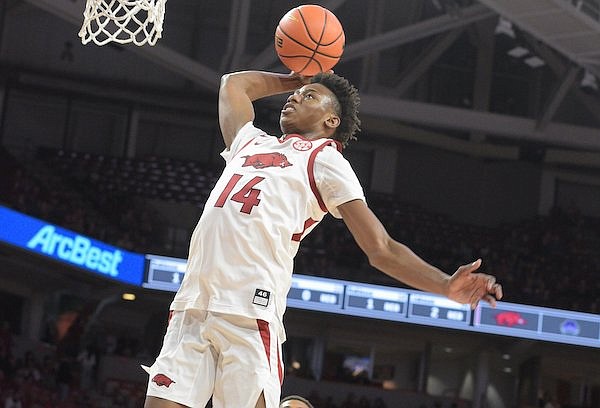 Arkansas guard Jaxson Robinson goes up for a dunk during a game against Central Arkansas on Wednesday, Dec. 1, 2021, in Fayetteville.

Robinson, a shooting guard who played in 16 games last season, has committed to BYU, according to a post to his Instagram account. On May 12, he became the fourth Razorback on the 2021-22 roster to announce plans to transfer.

A native of Ada, Okla., Robinson has at least two seasons of eligibility remaining. He transferred to Arkansas after one season at Texas A&M.

With Robinson’s pledge, each of Arkansas’ spring-time transfers have committed to other programs. Connor Vanover landed at Oral Roberts, Chance Moore at Missouri State and KK Robinson at SEC rival Texas A&M.

BYU, entering Year 4 under Mark Pope, finished the 2021-22 season with a 24-11 record and 9-6 mark in West Coast Conference play. The Cougars advanced to the quarterfinals of the NIT in March.