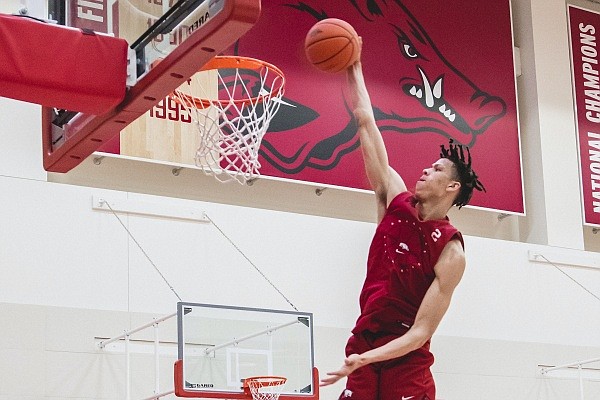 Arkansas forward Trevon Brazile dunks the ball during a practice on June 9, 2022, in the Razorbacks' practice facility in Fayetteville.

A 6-10 sophomore, Brazile was on the receiving end of plenty of praise from Musselman ahead of the Razorbacks’ two meetings with Missouri in 2022. In those instances, the coach felt as if the forward was filled with talent, potential and ability to alter games.

Musselman maintains that belief in the Springfield, Mo., native. And he is thrilled that Brazile can now make a difference for the Razorbacks.

“I thought that playing against him that he was a guy, if you look into the future, that had tremendous upside,” Musselman told reporters Friday in Bud Walton Arena. “And we still feel that way. He’s so long, he can shoot, he can run, he can block shots. Has to get stronger.

“We hope that he gets more confident, as well, as a player.”

Brazile, who has three seasons of eligibility remaining after transferring from Missouri this spring, was among the few bright spots on a Tigers team that finished 2021-22 with a 12-21 record. He averaged 6.6 points on 53.4% shooting and 5.1 rebounds over 25 games, including 23 starts.

Playing only 21.6 minutes per game, Brazile led the Tigers with 48 blocks. Kobe Brown, a forward and the team’s leading scorer, was second with 28.

According to KenPom data, he finished last season with a 10.1% block rate, which ranked 28th nationally. Brazile rejected two or more shots in 17 games, including a season-high six against Illinois, and had four blocks in a game twice in SEC play.

His freshman-year numbers are all the more impressive considering he committed 2.4 fouls per 40 minutes played, per KenPom.

Brazile wasted no time, either, making a strong first impression on new teammates at Arkansas.

“Trevon, the first day of practice he blocked my shot out to the three-point line,” Wichita State transfer Ricky Council said Friday. “I’m not really used to that. I think he blocked me the other day, too.”

Brazile was an intriguing spring-time addition given his ability to protect the rim and stretch the floor as a jump shooter. After at least one Arkansas-Missouri game last season, Musselman remarked he was pleased that the Razorbacks did not allow him clean looks on the perimeter.

He made only 11 of 33 attempts beyond the arc in 2021-22. Both figures could increase with continued work this summer.

“You know, we haven’t seen a big guy make (a shot) where he shot faked a close out, took a side-step three off the bounce and then he followed it up the next possession with a deep three,” Musselman said. “And that’s an evolving part of his game. I’m not saying that he’s arrived as a three-point shooter, but I am saying that … what we’ve seen in practices with him and a few of the other guys is like degree-of-difficulty shots that maybe just don’t happen.

“From a spot-shooting standpoint, that’s where we have to improve as a team.”