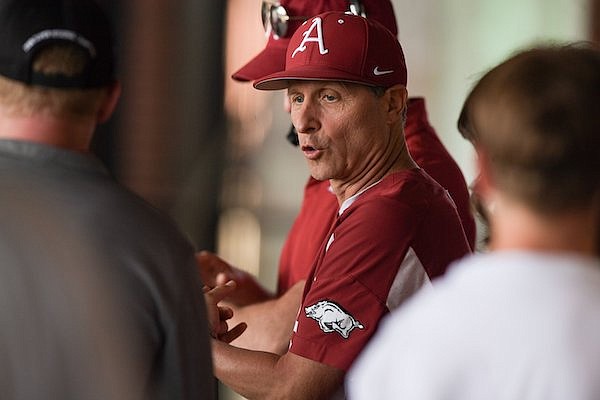 Arkansas basketball coach Eric Musselman speaks with fans as he waits to throw the ceremonial first pitch of a game against Ole Miss on Sunday, May 1, 2022, in Fayetteville.

FAYETTEVILLE — Eric Musselman, the Razorbacks’ men’s basketball coach, met with the media on Friday wearing a No. 12 Arkansas baseball jersey.

Musselman, an avid baseball fan who as a college student at the University of San Diego worked for the Padres, will attend his first College World Series game Saturday when Arkansas plays Stanford.

“I have never been,” Musselman said. “Cannot wait.”

“I went up to him and said, ‘Good luck,’ ” Musselman said, referring to Arkansas playing in the NCAA Tournament. “He was confident. He said, ‘We’re good. We’re in a good spot.’

“That was before this thing started. I went back and sat with [Musselman’s wife] Danyelle and said, ‘Coach is ready, man. He feels confident about his team.’ ”

Musselman said he’ll go to the College World Series with his son, Michael, the Razorbacks’ director of basketball operations, and Riley Hall, the team’s director of internal operations.

“It’s a good little mini-staff outing for us,” Musselman said. “We’re really looking forward to it.”