On defense, Hogs should look 'different' at the rim 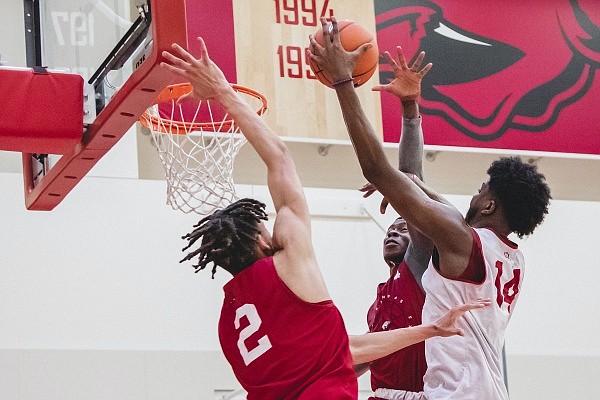 Arkansas forward Trevon Brazile (2) contests a shot at the rim on June 9, 2022, during a practice in the Razorbacks' practice facility in Fayetteville.

FAYETTEVILLE — Asked to assess what could be a strength for Arkansas in the 2022-23 season on Friday, Eric Musselman declared it was far too early to draw conclusions.

The Razorbacks are in the early stages of summer workouts on campus. And the group was only made whole Tuesday when Anthony Black, a 6-7 guard and one of the program’s three 5-star signees in the 2022 class, arrived on campus after competing for Team USA in Tijuana, Mexico.

However, based on practices and workouts to this point, Arkansas’ fourth-year coach does have an idea of what the Razorbacks’ identity could be.

“This doesn't mean that this is how it will unfold come November, but right now it's really, really hard to score on this team,” Musselman said. “If a coach is an offensive coordinator in practice, you'd much prefer to be the defensive coordinator right now, because we're really long.

It would not come as a surprise if Arkansas is a quality defensive team next season. In the last two seasons, Arkansas has finished No. 10 and No. 11 nationally, respectively, in defensive efficiency, according to data on KenPom.com, aiding its back-to-back Elite Eight runs.

And after a transfer recruiting cycle in which the Razorbacks landed four frontcourt players with great length who stand 6-9 or taller, there is potential for Arkansas to be a stingy defensive team at the rim, as well.

Musselman added that live 5-on-5 competition has been limited so far because the coaching staff is focusing on scheme and teaching various techniques to its large cast of newcomers. But in the up-and-down play that has taken place, rim scores have been minimal.

“In the limited live action, we should be a very good defensive team,” Musselman said. “We should be a team that looks different at the rim than we have in the past, because we are able to alter shots and block shots.”

According to KenPom data, Rhode Island transfers Makhel and Makhi Mitchell ranked 19th and 76th nationally, respectively, in block percentage last season. Arizona State transfer Jalen Graham placed 188th in the country with a mark of 4.7%, and Trevon Brazile was No. 28 at 10.1%.

Among lineup regulars last season, Jaylin Williams led the Razorbacks with a block rate of 4%.

“I think once the season starts it’s going to be hard for other teams to score on us, as well,” Arkansas guard Davonte Davis said Friday. “…The times we’ve been playing together it’s been pretty tough scoring at the rim. People are having to make tough shots.

“You’ve got to finish around the rim in different ways, because we’ve got a lot of length in there now. I think that’ll help us out, for sure, tremendously, when the season starts.”

Davis added that Brazile and Makhi Mitchell have stood out in practices as rim protectors. Other players, too, have held their own, he said.

Ricky Council, a 6-6 transfer from Wichita State who owns a 6-10 wingspan, noted one of his main takeaways from workouts is the team’s overall length.

“Putting pressure on the ball, that’s even hard for the point guard to get the ball up the court,” he said. “Scoring at the rim, that’s hard, as well.

“It’s going to be scary this season.”