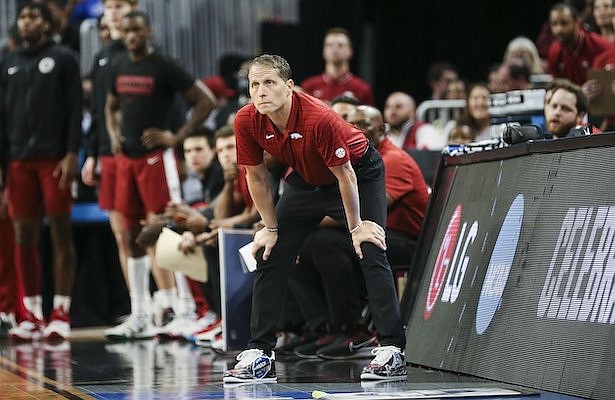 Arkansas coach Eric Musselman is shown during an NCAA Tournament game against Duke on Saturday, March 26, 2022, in San Francisco.

FAYETTEVILLE — Arkansas’ men’s basketball team is set to go on a foreign tour in August, it was announced Friday.

The Razorbacks, entering Year 4 under Eric Musselman, and their roster that includes 11 newcomers will visit Italy and Spain from Aug. 6-16, when they will mix exhibition games and sightseeing. Arkansas is expected to play four games during the trip.

“We are so excited to have this opportunity,” Eric Musselman said in a release. “First, we will get 10 extra, full practices to prepare for the trip. Second, the ability to play others, not just scrimmage each other, will be critical for this team with so many new faces. Third, this trip will help set the tone for this year’s team as they continue to learn our system, learn each other’s games and learn about their teammates as people.

“In addition, we will take this opportunity to learn from and about different cultures and just have a greater world view in general.”

The Razorbacks will arrive in Valencia, Spain, on Aug. 7. Their first game will come Aug. 9 in Valencia, Games 2 and 3 will be played in Madrid, and Game 4 in Lake Como, Italy.

Arkansas’ tour is the program’s first since 2016, when former head coach Mike Anderson and the Razorbacks visited Spain to play four games over 10 days. The covid-19 pandemic deterred the possibility of an overseas tour in the summers of 2020 and 2021.

An NCAA rule allows teams to make an international trip once every four years.

“The advantage for that, especially for a team like we have this year with roughly 10 new players and many of those young players, is you get 10 extra days of practice in and get those 3-4 competitions while you’re on the foreign tour,” Arkansas athletics director Hunter Yurachek said June 7 at the Fayetteville Chamber of Commerce State of Athletics luncheon.

“That’s going to be a huge advantage for our program.”

For Musselman, it will be his second foreign tour as a head coach. In 2017, Nevada traveled to Costa Rica for eight days and played the Costa Rica National Team and clubs from Canada.

The Wolf Pack went on to advance to the Sweet 16 of the NCAA Tournament.

Musselman also traveled to China in 2013 when he was an assistant coach at Arizona State under Herb Sendek.

According to a list of foreign tours compiled by college basketball insider Jeff Goodman, Ole Miss, Auburn, Alabama, Kentucky and Vanderbilt are other SEC schools with summer trips scheduled.