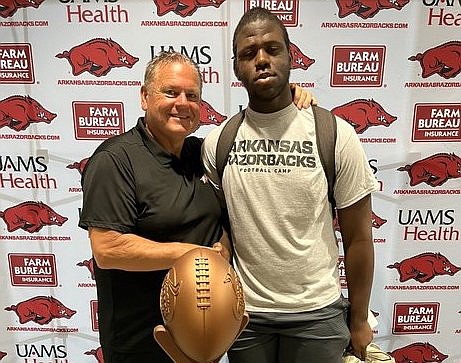 FAYETTEVILLE- Lonoke offensive lineman Chauncey Johnson showed why he is considered one of the top 2024 prospects in the state after his showing at Arkansas' camp on June 17.

Johnson, 6-4, 303 pounds, wowed onlookers with his athleticism in drills and testing. He recorded 5.34 seconds in the 40-yard dash and had an eye-opening 4.66-second mark in the shuttle.

"I think I did pretty good based of what I did earlier in the 5-10-5 and everything,” Johnson said. “I (had a personal record in) everything.”

He was excited to work with Razorbacks offensive line coach Cody Kennedy.

“I think Coach Kennedy will help me become an overall better player,”  Johnson said. “(He can) help me get to that next level I'm trying to get to.”

He was named to the Arkansas Democrat-Gazette All-Arkansas Preps Underclassman team after grading out at 81% and finishing with 67 pancakes/knockdowns as a sophomore.

Johnson, who visited the Razorbacks for Prospect Day on Jan. 29, was inspired to camp at Arkansas because of Kennedy and other coaches.

"I wanted to come work with Coach Kennedy and meet the coaching staff up here,” he said.

Receiving an offer from Arkansas would be a thrilling moment for Johnson.

"It would mean the world to me because it's our home state,” he said. “To be able to play in my home state some day will really require me to work hard."