'He's playing out of his mind': Stovall first player with 5 hits at CWS in 13 years 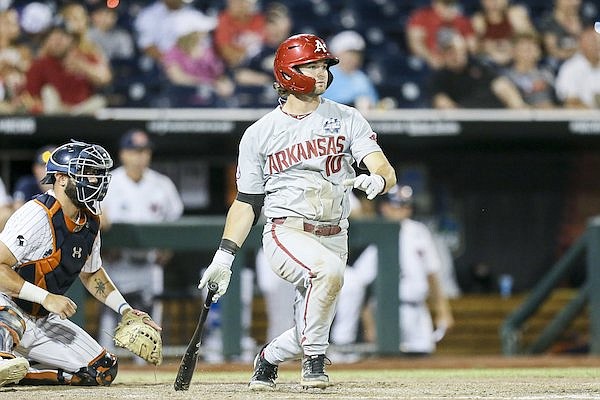 OMAHA, Neb. — Speaking outside the team locker room, Arkansas first baseman Peyton Stovall was unsure whether he had a five-hit game at any level of baseball prior to Tuesday night.

Stovall went 5 for 6 and had 3 RBI during Arkansas’ 11-1 victory in an elimination game over Auburn. The Razorbacks (45-20) advanced to play in a national semifinal matchup against Ole Miss beginning Wednesday at 6 p.m.

Stovall, who has been Arkansas’ best hitter over the last three weeks, was moved to the No. 2 hole from the No. 8 hole prior to the game for the Razorbacks’ first lineup change since the NCAA postseason began June 3. Stovall was in the batting cage when Arkansas coach Dave Van Horn informed him of the move.

“I was excited,” Stovall said. “My confidence has just grown, just to know Coach Van Horn has that trust in me and that belief in me, it means a lot. Confidence is just the biggest thing in this whole equation, just staying confident at the plate. Once I saw my name in that two spot, it just only grew.”

Stovall, who had a .252 batting average during the regular season, is batting .525 and has an OPS (on-base plus slugging) of 1.248 in 9 postseason games. He has 13 RBI during that time, including 10 RBI in games against Stanford, Ole Miss and Auburn at the College World Series.

“He’s playing out of his mind,” said Arkansas right fielder Chris Lanzilli, who finished 3 for 5 with 3 RBI. “I haven’t seen somebody go off like this in a long time. He must be seeing a beach ball up there. It’s impressive to see.”

Stovall said he benefitted from a prolonged stretch out of the lineup, which began with an April 30 game against Ole Miss when he was scheduled to sit out, but injured a finger taking ground balls during the pregame. Once the finger healed, he continued to sit out until he was put back in the lineup for the opening game of the Alabama series on May 19.

“He had unrealistic expectations of him because he was a guy that turned down a lot of money,” Van Horn said of Stovall, who was a projected by some outlets as a first-round pick in last year’s MLB Draft.

“He wanted to go to college, and he just felt a lot of pressure — social media and everything else, and you read everything and preseason this, preseason that. It's hard putting that on kids that haven't even seen a college arm yet….We’ve really been able to see the future the last month. It's been fun.”

Stovall’s fifth hit was a two-run single with two outs in the top of the ninth inning to stretch Arkansas’ lead to 11-1. The Razorbacks scored 10 runs with two outs against Auburn, including all seven runs over a pivotal stretch in the third and fourth innings that ballooned Arkansas’ lead from 1-0 to 8-0.

“You could feel the momentum and you could feel the wind being sucked out of them,” said Lanzilli, whose fourth-inning home run to left field was measured 416 feet. “We felt pretty confident the rest of the game.

“We were able to get runners in scoring position with two outs and kind of staying simple at the plate and putting the ball in play. Obviously it worked out for us.”

Three of those two-out RBI hits also came with two strikes, including Stovall’s single in the ninth inning. Stovall had another two-strike RBI hit in the first inning.

“I can’t tell you how many hits we had tonight with two strikes,” Stovall said. “I think that was huge for us. Just being able to do that and just being able to grind out at-bats has really been a key down the stretch, and hopefully we can continue to do that.”