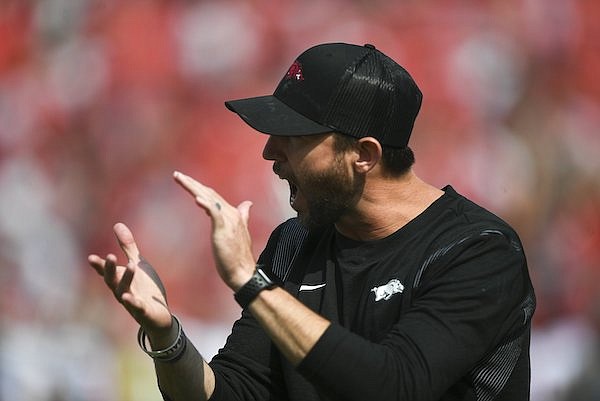 Arkansas offensive coordinator Kendal Briles is shown during a game against Georgia on Saturday, Oct. 2, 2021, in Athens, Ga.

Williams, 6-0, 180 pounds, of Chandler (Ariz.) Basha, has offers from Arkansas, UCLA, Arizona State, Oregon, Louisville, TCU, California, Arizona, Colorado and other schools. He received his offer from the Razorbacks on June 13.

He is expected to arrive in Fayetteville on Thursday.

"I plan to visit to really get a feel for the city and what the coaches are like face-to-face, in person," Williams said. "I just want to experience the whole facility and the great fan base and campus, then do great in the camp on Friday."'

"I'm very impressed with him," said Lemming, who rates him a 4-star-plus recruit. "Not real big, but an exciting offensive player. He can throw and run."'

His father, who was a cornerback at Michigan State, will accompany him. Williams is the latest 4-star signal caller who offensive coordinator Kendal Briles has been able to get to campus.

"It's a good relationship between us and I feel it will only get stronger," Williams said of Briles.