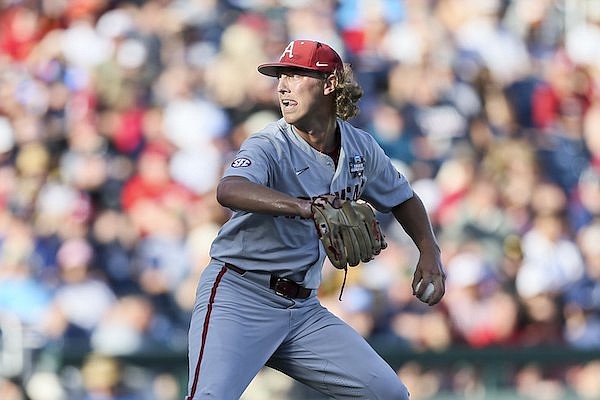 OMAHA, Neb. — Arkansas extended its stay at the College World Series by at least one more day with a 3-2 victory over Ole Miss on Wednesday.

The Rebels stranded the bases loaded in the ninth inning when Jacob Gonzalez flied out to left field. Ole Miss trailed 3-1 going into the inning and loaded the bases with no outs, but could only muster a two-out RBI single from Justin Bench.

Arkansas reliever Zack Morris, who was the losing pitcher when the Razorbacks played the Rebels on Monday, retired three of four hitters after he inherited the bases loaded with no outs.

The Razorbacks (46-20) handed the Rebels (39-23) their first postseason loss and forced a decisive national semifinal game against Ole Miss that is scheduled to begin Thursday at 3 p.m. The winner of Thursday’s game will play Oklahoma in a best-of-three-game series for the national championship beginning Saturday.

Arkansas starter Hagen Smith and reliever Evan Taylor — both left handers — combined to hold Ole Miss to three hits through eight innings, but Taylor ran into trouble when he allowed a leadoff single to Kemp Alderman to lead off the ninth inning.

He was replaced by right hander Brady Tygart, a Freshman All-American from Hernando, Miss., who hit Peyton Chatagnier and Hayden Dunhurst in consecutive at-bats to load the bases.

Morris struck out Hayden Leatherwood for the first out and got pinch hitter TJ McCants to fly out to left before Bench’s RBI hit.

Smith allowed 1 run on 2 hits and struck out 8 in 5 innings in his first start since May 14. Taylor pitched three scoreless innings before allowing the run in the ninth.

Arkansas’ Chris Lanzilli and Brady Slavens hit solo home runs to lead off the second and fifth innings, and Cayden Wallace extended the lead to 3-1 following a leadoff double in the eighth inning. Wallace scored on Michael Turner’s RBI single in the next at-bat.

The Razorbacks missed on an opportunity to potentially break open the game in the eighth. After Jalen Battles was intentionally walked to load the bases, Slavens and pinch hitter Kendall Diggs struck out against Ole Miss reliever Jack Dougherty.

The Rebels’ only run against Smith came via Alderman’s leadoff homer in the bottom of the second inning against Smith to tie the game 1-1.

Slavens regained the lead, 2-1, for the Razorbacks with a 436-foot blast against the wind to straightaway center field in the fifth. It was the longest home run recorded during a College World Series game at Schwab Field, which opened in 2011.

Arkansas won a tight, low-scoring game after three lopsided decisions in Omaha — victories over Stanford (17-2) and Auburn (11-1), and a 13-5 loss to Ole Miss on Monday.

Ole Miss had a seven-game winning streak end. The Rebels had outscored their postseason opponents by a combined score of 64-17 prior to Wednesday.

Arkansas is trying to become the first team to battle through the losers bracket and play in the national championship series since Oregon State in 2018. The Beavers defeated the Razorbacks in a three-game series for the title that year.