'I just wanted the ball again': Morris delivers with season on the line 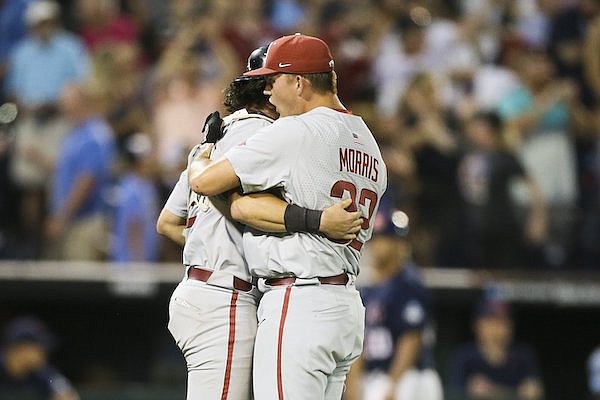 Arkansas pitcher Zack Morris hugs catcher Michael Turner after recording the final out of a 3-2 victory over Ole Miss at the College World Series on Wednesday, June 22, 2022, in Omaha, Neb.

OMAHA, Neb. — Few words were needed and few were spoken when left-handed pitcher Zack Morris entered with the bases loaded and Arkansas’ season on the line Wednesday night at Schwab Field.

“That was it,” Morris said. “Plain and simple.”

Two days after Morris failed to make it out of the first inning of a start against Ole Miss at the College World Series, he redeemed himself by limiting the Rebels to one run in the ninth inning of the Razorbacks’ 3-2 victory in a must-win game. His three-out save forced a decisive national semifinal between the teams Thursday at 3 p.m. The winner will play Oklahoma for a national championship.

With three runners on base and nobody out, Morris steadied what had been a shaky inning for the Razorbacks’ bullpen. Ole Miss five-hole hitter Kemp Alderman singled to opposite-field right on the first pitch he saw from Evan Taylor to lead off the inning.

That prompted a pitching change to freshman right hander Brady Tygart, a Hernando, Miss., native who hit Peyton Chatagnier and Hayden Dunhurst on his fourth and fifth pitches.

Then Van Horn walked to the mound and motioned for Morris, who allowed 2 hits, walked 2, hit 1 batter and threw 1 wild pitch in a 2/3-inning, 25-pitch start against the Rebels on Monday. Ole Miss’ 13-5 victory was the first loss of the season for Morris and sent the Razorbacks to the losers bracket.

“I was just hungry for the ball again,” Morris said. “Right after the start, I texted Coach Van Horn that night. I was like, ‘I want the ball again,’ and I didn't get it yesterday. We didn't really need it because Will (McEntire) went out there and threw a gem. But I just wanted the ball again.”

After he threw his first two pitches low and out of the zone, Morris got Hayden Leatherwood to swing at a 2-0 fastball to take off some pressure. Leatherwood fouled off the next pitch and swung through a 92 mph fastball for the first out of the inning.

Pinch hitter TJ McCants flied out for the second out when left fielder Jace Bohrofen and shortstop Jalen Battles collided in shallow left field. Bohrofen held on and Alderman was unable to tag at third base.

Ole Miss cut the deficit to 3-2 on Justin Bench’s two-out infield single. Battles gloved the ground ball, but did not make what would have been a rushed throw to any base.

The game ended when Jacob Gonzalez flied out to Bohrofen in left on a 2-2 fastball.

“He had a little different look to him tonight than he looked like (Monday) night, so I was proud of him,” Van Horn said of Morris. “Sometimes you don't know until you experience it, and you have to get knocked down a little bit to have success, and I think he really genuinely wanted the ball tonight.”

Morris said the ninth inning of Wednesday’s game was the most calm he has ever been on the mound.

“I know what I’m capable of doing, and that’s honestly the only answer I have,” he said when asked why he was calm. “I just know what I can do. If I just stay calm and not go get in my head, it will be OK.”

The thrilling ending concluded a long night for Morris, who began throwing in the Arkansas bullpen in the third inning. He estimates he threw between 50 and 60 pitches before his first pitch that counted.

“They tell you to get hot and then you don’t go throw,” Morris said. “You’ve just got to keep your body ready.

“I think I did a good job at trying to save some energy for that last inning.”

Morris, Taylor and starter Hagen Smith succeeded at the left-handed pitching plan that didn’t work for the Razorbacks on Monday against the Rebels. Van Horn made the decision to start Morris then due to Ole Miss’ batting splits, including a .294 batting average against right-handed pitchers compared to .251 against lefties.

The Rebels knocked around Morris and Taylor for a combined 4 runs and 4 hits over the first 2 innings Monday.

The three Arkansas left handers who threw Wednesday recorded all 27 outs and held the Rebels to five hits, which tied for their fewest in an NCAA postseason game this year. Ole Miss averaged 11 hits during its seven-game win streak to begin the NCAA Tournament and had 13 hits against the Razorbacks on Monday.

“I think there were a few of us who aren’t too happy with our first outing against them the other day,” said Taylor, who allowed 1 run, 2 hits and struck out 4 in 3 innings Wednesday.

“To get to come back with an answer for it, it’s a pretty good feeling. I’m sure (Morris) feels the same way.”