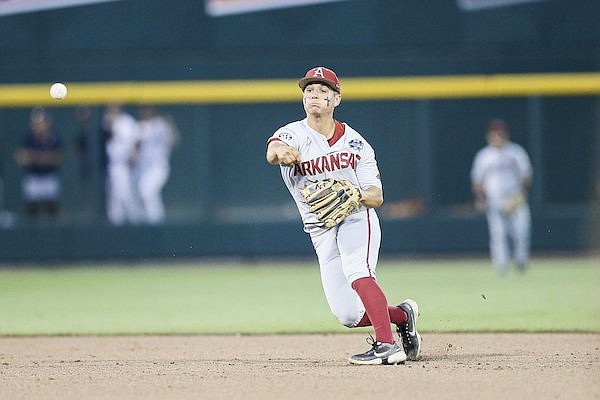 Arkansas second baseman Robert Moore throws toward first base during a College World Series game against Auburn on Tuesday, June 21, 2022, in Omaha, Neb.

Moore was named the winner by Rawlings and the American Baseball Coaches Association. He is the first Razorback to win a Gold Glove Award, which was first awarded at the collegiate level in 2007.

Other finalists at second base were Matt McDermott of Coastal Carolina and Mario Camilletti of Central Michigan.

Moore is fielding .992 this season for the Razorbacks, who will play Ole Miss in a national semifinal game Wednesday at the College World Series. He has committed 2 errors in 163 attempts, and has helped turn 46 double plays.

In a lengthy post on his Twitter page, Moore thanked several teammates and coaches for their help. Among those he singled out were first baseman Peyton Stovall, third baseman Cayden Wallace and shortstop Jalen Battles.

"This is just as much Peyton, Jalen and Cayden's award as it is mine," Moore wrote.

"So very deserving!" Arkansas assistant coach Nate Thompson tweeted Wednesday of Moore's award. "So many plus defenders on this team. Special group of defenders."

Moore’s great fielding has been on display throughout the College World Series. He made the No. 9 play on ESPN SportsCenter’s top plays list Saturday when he fielded a ball on the opposite side of second base and threw against his body to record an out at first base. On Tuesday, he began a second base-to-shortstop-to-first base double play that ended an 11-1 victory over Auburn.

“Those guys are ridiculous up the middle,” Arkansas catcher Michael Turner said Tuesday of Moore and Battles. “It's fun to watch for sure.”

Arkansas pitcher Connor Noland was a finalist for a Gold Glove. The pitcher award was won by Iowa’s Ben Beutel.

“Moore brings the gamer mentality with him, and with his strong defensive play, the ability is there to hold down second base as he works his way up the ladder,” a Baseball America scouting report reads.