With backs against the wall, Razorbacks confident for Ole Miss rematch 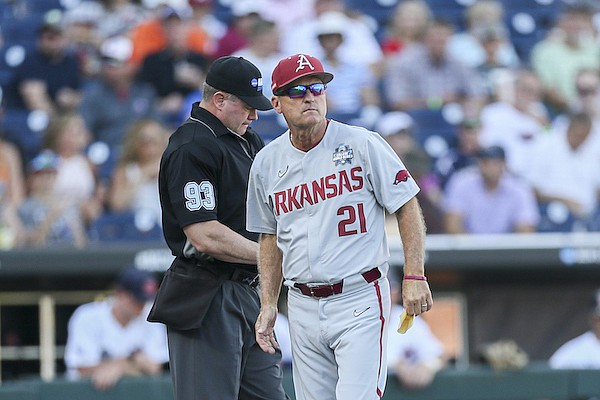 Arkansas coach Dave Van Horn (21) is shown prior to a College World Series game against Auburn on Tuesday, June 21, 2022, in Omaha, Neb.

OMAHA, Neb. — The Arkansas baseball team has confidence in itself entering its rematch with Ole Miss on Wednesday at the College World Series.

The Razorbacks (45-20) are trying to become the 13th team to advance to the national championship series through the losers bracket of pool play in Omaha since the tournament expanded in 1999. The last team to do so was Oregon State in 2018 when the Beavers defeated Arkansas in the championship series.

In order to join the short list of teams that have battled out of the losers bracket, the Razorbacks must beat Ole Miss on Wednesday and again Thursday in a national semifinal. The Rebels would play for a national championship with a win in either of those games.

"We don't want to go home," Arkansas coach Dave Van Horn said. "We think we can play five days in a row. We like it. We're here until we're not."

Arkansas defeated Auburn 11-1 Tuesday in its first elimination game at Schwab Field. The Razorbacks out-hit the Tigers 16-4 and scored 10 runs with two outs in an inning.

The Rebels (39-22) are in the drivers seat on their side of the bracket by virtue of a 13-5 victory over the Razorbacks on Monday. Oe Miss did not play Tuesday.

“We’re looking forward to the challenge ahead,” Arkansas first baseman Peyton Stovall said Tuesday following his five-hit performance against Auburn. “We know what we have to do and it’s not going to be an easy road. We just want to go out there and compete, continuing to play like every game could be our last.”

Van Horn did not name a starting pitcher for the game against the Rebels. One possibility for the Razorbacks is Freshman All-America left hander Hagen Smith, who started 14 games during the regular season but has been used in a closer role during the postseason.

"We could bring back Noland on three days' rest if we wanted," Van Horn said. "He's talking to us about it."

Believing a left-handed pitcher was the best way to attack the Rebels on Monday, Arkansas started Zack Morris, but Morris struggled with command and recorded only two outs. Ole Miss hits .251 against left handers, compared to .294 against right handers.

“You dig deeper into the stats, most of the damage they do — home runs, big innings, extra-base hits — come off right-handed pitchers,” Van Horn said Monday.

Tuesday’s game against Auburn could not have played out much better for Arkansas from a pitching standpoint. Starter Will McEntire threw seven innings before Zebulon Vermillion and Austin Ledbetter made quick work of the Tigers with an inning apiece. Vermillion needed only four pitches to get through the eighth inning.

The Razorbacks will go into Wednesday’s game with most of their front-line relievers on multiple days of rest.

“Fortunately, because Will gave us an opportunity, we got to save our whole pitching staff for the most part,” Van Horn said following the Auburn game.

“The plan is save as much pitching as you can, and the offense, they helped us, obviously, by scoring and continuing to score. You never know how this thing is going to go. Baseball is a funny game. Whatever it takes, that will be what we do tomorrow. We'll do whatever we've got to do tomorrow to try to win tomorrow.”

Ole Miss is expected to start left hander John Gaddis (3-1, 4.40 ERA). Gaddis allowed 2 hits and 1 walk in 2 1/3 innings of scoreless relief at Arkansas on May 1 in his first outing following an appendix surgery 15 days earlier.

Gaddis began the season as a starting pitcher, but transitioned to a relief role. Wednesday’s outing will be only his second in the past month. He allowed 1 run on 2 hits in 2 innings during a 22-6 victory over Arizona at the Coral Gables (Fla.) Regional on June 6.

The Rebels’ bullpen is also well rested due to a low number of games in Omaha and strong starts from Dylan Delucia against Auburn and Hunter Elliott against Arkansas. Ole Miss' starters each pitched 7 2/3 innings in those games.